Yes. it IS Hallowe’en in a couple of months. At least in my book it is. Not ‘Halloween’ , which to me always seems a sloppy rendition! So in the best Hallowe’en traditions I am writing a ghost story. Of sorts. The last Hallowe’en story that I did was ‘Reflections’, set in the Thunderbirds fandom. This current one will be UFO, and will be, like the series itself, dark and angst-ridden. Time will tell! It will be short though as I have too many other projects to complete and work starts again next week.

Hallowe’en story complete. As usual I did the first ‘straight from the fingers’ version ( with only minor edits) and then printed it out with a view to 2nd draft. According to the ‘rules’ of editing, I should have taken about 300 words from the piece. (it is running at just under 3K words) But, as usual I read through deleting madly (and yes, that is an adverb, but so what!) and cut out the doubles, and redundancies, tweaked a few areas, corrected the errors and still ended up adding forty words to the whole thing.

I don’t mind though. This is never intended to be anything more than ‘froth’, a quick piece to entertain at Hallowe’en. Hope it works!

And on a final note, perhaps this year I might finally get that pumpkin of Virginia Lake done to put on my gatepost. It will be the last chance I have! 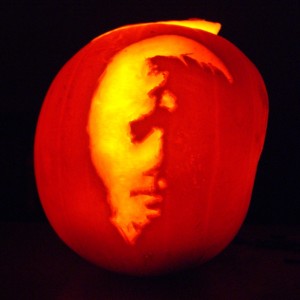