The rattle of china startled him from dreams. Blinking, he rubbed his face to  stretch and awaken skin dulled by deep sleep, then  pushed himself upright before remembering where he was.

He looked around. Rebecca, hair tousled and still charmingly half-asleep herself was puttering in the kitchen, scooping coffee into mugs while the kettle boiled. He wrapped the throw around his shoulders, and sat back, allowing himself the luxury of waking slowly while she yawned and poured milk into mugs.

‘Here.’ A brief contact of hands as he took the mug and she sat beside him. ‘You were tired.’

‘I don’t mind. Really.’ She smiled. ‘Go and have a shower before Mr Freeman arrives. He phoned last night and said he’d pick you up first thing.’

Straker grimaced. ‘Alec. Typical.’ He leaned back, sighing. ‘Thank you for last night. It was …. ‘

‘I was glad to be able to help.’ She stood up, ‘Finish your coffee, there’s towels and stuff in the bathroom. I’ll make breakfast when you come down.’ She regarded him for a moment, then reached out to stroke his jaw, ‘There’s a razor as well. Ladies, but it will do.’

He turned away before his expression could betray him. ‘Thank you.’  The mug held tight, he hunched over the fragrant aroma, waiting until she had walked away. He concentrated on the brew, the taste, anything other than watch her as she tidied up and cast glances at him, then he walked upstairs, into the bathroom and turned on the shower. In silence.

Rebecca wrapped her dressing gown around herself, tugged  the belt tighter and listened to the sounds from the bathroom above. Water running, faint footsteps, that stillness  as he undressed, then more steps across  the space. The flow of water interrupted, random splashes, water draining away, down over him, over blond hair and………………

She stood there,  her hands fiddling aimlessly with teaspoons, hearing the unfamiliar noises of someone else in her  home.

The cessation of flowing water above. A soft thump  as he stepped out to dry himself  then  a  gurgle of water in the pipes as, she realised,  he started to shave.

The doorbell rang, wakening her from her reverie.

‘Come on.’ Alec pressed the bell again, his voice a soft hiss as if  unwilling to show his concern.

‘Give her a chance Alec.’ Sara pulled him back. ‘It’s early. And ..’ she turned as the door opened. ‘Hi.’ She gave Rebecca a sheepish grin in apology.

‘Is Ed awake? I want to see him.’ Alec wanted to push past her but held back, aware that Sara was stepping forward now.

‘I’m sorry about this Rebecca, really sorry. We were worried about Mr. Straker when we couldn’t contact him last night and after the last few days .. well you know.’ She shrugged.

Come in.’ Rebecca led the way into the living room, picking up the throw to fold and drape it over the back of the sofa, before tossing the cushions back into place. ‘He’s in the shower.’ She was angry now, although she couldn’t really say why, just that Mr Freeman, and Sara as well,  were acting like prison guards, demanding the return of some miscreant. No wonder Ed had wanted a  quiet evening away from everything.

Alec sighed. ‘I’m sorry. I’m overreacting. My apologies Miss Steel. I was concerned about  Ed even though Sara said he would be safe with you.’

Sara frowned at Alec in warning. ‘We wondered if he’d had a relapse. The doctors said it was a possibility.’ There, that should allay any further questions.

Rebecca pulled her dressing gown even  tighter around herself and straightened as if coming to a decision, ‘No, he’s fine. I was just about to make breakfast.’

They stood there, Rebecca in the kitchen area, Alec and Sara on the other side of the breakfast bar. The kettle boiled, she went through the simple routine of spooning and pouring, adding milk and stirring before passing the mugs across the barrier, still in silence and she heard the creak of old wood as  Ed came out of the bathroom,.

Alec put his mug down and hurried across the room, looking up the staircase and as he did so Rebecca turned to Sara. ‘So? What?’

Sara took her mug, sat on the sofa and shook her head almost imperceptibly, her eyes flickering to Alec Freeman. ‘Not now.’ she murmured, and Rebecca nodded at last, aware that Sara relaxed.

Straker walked down the stairs, vigorously rubbing his hair dry with a small towel and brushed past his friend. Frowned. ‘Alec.’

‘I was worried,” he started. “Anything could’ve…’

Straker took the mug Rebecca held out to him. ‘But it didn’t. Leave it Alec.’ Visibly pulling himself together he nodded at Sara. ‘Dr. Harper.’ A terse almost rude acknowledgement before he sat on the sofa, reaching down to pick up his discarded shoes and pulling them on.

Rebecca continued in the kitchen,  getting  butter, knives, plates, putting everything out, in the growing silence.

‘Ed?’ She gestured to him, a wave of her  hand and he came and sat at the  bar, taking  a slice of hot toast, ignoring Alec and Sara as they finished their drinks. Alec stepped forward, putting his mug down, one glance at Rebecca.  ‘We’ll wait in the car.’

Sara flashed a quick look at Straker before  nodded at Rebecca. ‘I’ll call you later. Talk to you properly. Lunch this week maybe?’  She followed Freeman out into the cold morning.

‘Alec always was …. protective,’ he grimaced, ‘I should have told him where I was, but…’

She passed him the marmalade, the taste reminding him of another  breakfast, another morning.

‘I should go.’ He put the last crust down on the plate, the knife on top, pushed it a few inches away. Looked at her.  ‘Thank you.’

She heard the lock on the  front door click. Footsteps going down. She could see the car outside waiting under a streetlight, and he got in the back, hidden behind the dark glass. It drove away and she stood there for a while, looking up  the empty street at the  wide tyre tracks on the thin layer of snow that covered the setts,  before she  went upstairs to shower and dress for work.

Sara stared straight ahead, aware of the tension in the vehicle as Alec drove, his fingers gripping the wheel. He had not spoken since Straker had got in. Neither man had. She tightened her  lips and kept her thoughts to herself.

Out of Hounslow, heading along busy roads, the traffic slower than usual on the treacherous roads, Straker rigid with arms folded, Alec glancing up every few moments to check him in the rear-view mirror. Sara sighed and tried to relax. The car picked up speed on the quieter side road to Harlington, Alec’s eyes constantly flicking  to the mirror, watching the quiet man in the back seat.

‘Fuck.’ There was a heart-stopping sensation as he looked ahead and realised the car had drifted  into  the middle of the road, towards  oncoming traffic.
Alec’s muttered oath broke the silence  as he swerved back  then  eased off the accelerator and held  the wheel steady, his fingers white with stress. The car slowed to a halt, he loosened his hold, casting a glance up at the mirror to check his passenger. ‘You okay, Ed?’

’Trying to get rid of me Alec?’ but there was a hint of relief in the voice, as if Straker had been waiting for an opportunity to breach the uncomfortable atmosphere. He unfolded his arms, ‘Sara?’

She twisted round to face him, ‘I’m fine.’ She patted Alec on the knee. ‘Just a little more  care if you don’t mind.’

‘Sorry.’  He looked up again. Eyes met, and Straker gave the briefest of nods.

‘Alec, I could do with some stuff.  Can you drop me at my place?’ A casual request but   Straker hoped his friend wouldn’t put up any objections. He did want some clean clothes but more than that he needed to assure himself that  he still had a home, still had somewhere that he could retreat to when he wanted to be alone. A place of his own, not some anonymous basement room with the bare basics. 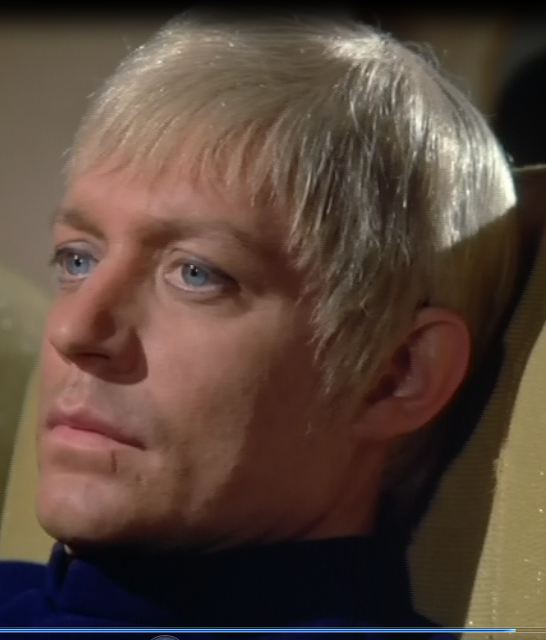 Another meeting of eyes. ‘Okay.’ Freeman slipped the car into gear and drove on, slower now and with more care.  The turning ahead, Straker’s house close by now,  and Alec pulled up in the driveway. ‘Damn. Keys. I’ve got them somewhere.’ He started to  rummage  though his briefcase while Straker waited, standing  in front of the neat bungalow.

‘These?’ Sara held up a bunch she had found in the glove box  and when Freeman nodded, with a sheepish grin, she got out to take them to Straker.

‘Thank you.’ He took one pace towards the small porch, turned back. ‘Sara. A word with you?’ He stepped closer, turning his face away from the car, from Alec, waiting there. ‘Alone?’ his voice almost a whisper.

Solemn blue  eyes,  not pleading but earnest, regarded her, and it all fell into place. ‘Rebecca?’ her reply as soft as his question and he nodded once.

‘Alec,’ Sara Harper leaned into the car. ‘I’ll give him a hand,’ her eyebrow lifted in silent entreaty.