‘That’s it then.’ Straker closed his laptop and looked at the two men sitting there. ‘Anything I’ve missed? Paul? Jackson?’

‘I can’t think of anything. It’s just a case of waiting.’ Paul Foster handed Straker a fresh coffee. ‘What do we do now?’

Straker took a mouthful and stretched his arms, wincing at the sound of his shoulders cracking. ‘Get some sleep Colonel. Be back here at seven for final briefing.’ He held up a hand as Foster started to protest. ‘If you intend leading one team then you have a break. That’s an order.’

It was enough of a threat to get Foster on his feet and heading out of the office after a last look at the maps spread out on the table.

Jackson gave a short bow that would have gone unnoticed by anyone else. ‘Until this evening, Commander.’ The door closed behind him as Straker pushed his chair back, stifling a yawn. The hours of intensive planning had wearied him more than he realised but at the back of his mind was the thought of Alec and Keith. He dropped his empty cup in the bin and decided against getting another drink. Too much caffeine might make him edgy later when he needed to be in complete control. Fresh air. That was what he needed now. Fresh air and exercise if he was to keep alert. There would be no rest for him until after.

He put the last hours behind him as he walked with brisk steps around the sound stages to the park, keeping his gaze averted from what was happening in the studios. He needed to focus his mind on the coming assault, not the trifling demands of directors. The small park was deserted as usual and the carp in the pond bobbed to the surface as he leaned on the narrow rails of the bridge. ‘Sorry, nothing for you today,’ he murmured, his fingers tingling in the cold air. He stuffed his hands in his pockets and touched the chain that was tangled there.

Keys. He pulled them out, tossing the bundle in his hand before closing his fingers tight.

Rebecca. Tonight. He needed to call her. He put the keys away and took the short cut back to his office. 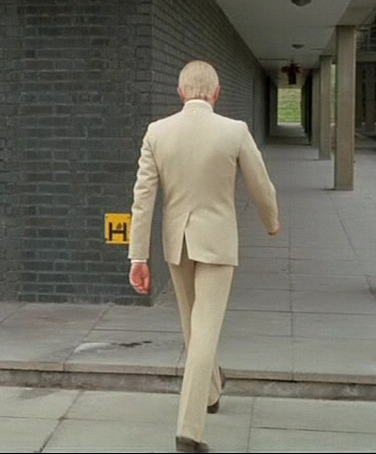 Miss Ealand deleted yet another unsolicited email from an aspiring film producer who had no experience and even less talent. This was the unrewarding side of the job, the part that wasted her time when she had more important things to do. Her priority was organising Ed Straker’s workload, not dealing with trivia. She worked on, knowing that he would not know what she had been doing, would not notice in fact, but she was making his job easier. That was all that mattered.

He had gone out a short time earlier, walking straight out without stopping. Not from rudeness, he was not like that, but he had been preoccupied and had seemed unaware of his secretary.

Blinkered. That was the phrase she used when he was like this with his mind focussing on one thing to the exclusion of everything else. It was a rare occurrence, but she knew Ed Straker well enough not to distract him. When he returned, maybe he would acknowledge her, maybe he wouldn’t. It was not important.

Another unopened and unread email to be discarded. She was adept at scanning his inbox and clearing out the dross and there was a sense of satisfaction in the task in the knowledge that she was doing her own small part. She was about to delete the next batch of emails, but one name stood out.

Dale. Yes, she remembered him; a large man, shy and diffident, homeless and an alcoholic according to the details that security had given her. But none of that mattered. There was only one thing that was important about Dale Atwood. He had saved Ed Straker.

Intrigued, she opened the email, read it and smiled. Ed Straker, SHADO Commander, ex astronaut, Air Force Colonel and ….. she grinned even more; information technology teacher. But she had known him for years, had come to respect him and as she had told Sara Harper, John Shepherd was exactly the same as Ed Straker.

She deliberated for a moment before making up her mind. If the Commander had thought Dale Atwood had some potential, then she was not going to argue. There was a vacancy in the IT department, a trainee post, designed to teach a school leaver the basics and give them experience as well as qualifications, but one of her duties was also to oversee recruitment. She arranged for an interview in a couple of days. It would be her way of repaying Mr Atwood.

She slipped the formal letter to Dale into an envelope and was putting it aside to go with the rest of the afternoon’s post when the door opened.

‘Miss Ealand,’ Straker looked down with a quirk of his lips, ‘still busy?’

‘I’m about to finish,’ she said and held out a small box. ‘This is for Miss Steel. I picked it up at lunch time.’

He opened it to look inside then picked up a pen from the desk. ‘I’ll just add a note.’ He wrote briefly on the card and slipped it into the box before handing it back to her. ‘Thank you.’

She saw a distant smile on his face as if he was remembering one moment. ‘You just need to confirm tomorrow’s appointments,’ she said.

Straker was still holding her pen and he fiddled with it for a moment, his head down as if reluctant to look at her before he put it back. ‘Cancel all my appointments for tomorrow. I might be…’ He paused. ‘I’m sorry I can’t tell you any more at this time. But…,’ he gave her a smile. ‘Maybe tomorrow.’ Eyes met. She did not say anything, just watched as he went into the office and sat down, still looking at her, still with that expression on his face. A look of hope, and, as the door closed she saw him pick up the phone.

The Shelter was quiet with the men back in the familiar routine of sneaking out for a quick fag after lunch and then trailing back for their evening meal reeking of beer and cigarette smoke. Little mention of John Shepherd and after all, why should there be? Shepherd was just another anonymous transient who came and went, leaving no trace of his presence. Only Dale seemed to feel his absence.

Rebecca read through the Project worker’s update and bit her lip, then rifled through the pile of leaflets that had accumulated on her desk, looking for the one that Dale had given her. There. No. Far too expensive, even for someone on benefits. And the cheaper courses, the ones that the charity could afford, were useless. Damn. Perhaps Harlington-Straker might be able to give Dale a chance, even if it was in construction.

It was not the ideal solution, but better than nothing. She looked at her watch. Just after four. Not long to the end of work for today. She’d been to Marks at lunchtime to get something for supper. Stifado, a bottle of red wine, cheesecake for afters. Something decent for once.

‘Rebecca. Call for you. Private.’ There was a grin on the receptionist’s face as she held the door open. ‘Someone called Straker.’

She felt the heat rise in her face as she went through to pick up the phone and she turned away to answer. ‘Hi. Rebecca here.’

His voice made her blush even more. ‘Rebecca. Look…’ There was a note of hesitation. She heard a breath and he spoke again. ‘I’m sorry. Something’s come up. I’m going to be busy tonight. A…….’ another hesitation as if he was trying to come up with some excuse. ‘A night shoot and they need me there. Maybe tomorrow if that’s okay?’

There was a false brightness in her reply. ‘Sure, no problem.’ The receptionist was still listening and Rebecca searched for something else to say. ‘I’ll see you tomorrow then.’

She put the phone down. Stifado. And red wine. Dammit. She should take it to Sara’s tonight. The wine at any rate. Have a girl’s night in for once. Sara had seemed a bit down when they spoke yesterday, something to do with Alec being away, so there was no reason why Rebecca shouldn’t get over there for early evening. She had a key to Sara’s anyway so perhaps she should take the casserole as well; it was a decent meal and she could buy something else for tomorrow. It would be good to talk to Sara. To really talk. To tell someone who understood, about last night.

Rebecca went back to her office to start on the mind numbing complexities of funding and government initiatives.