Paul was waiting. It was all he could do. He was ready and almost excited in a perverse way. Something positive to do at last, instead of sitting there planning and thinking and talking. He shrugged his shoulders, settling his backpack into place and touching his helmet to check yet again that his goggles were still in position. His group were ready, standing at the entrance to the boarded-up rotunda that housed the steps leading down to the tunnel. He could feel his hands sweating inside his fine leather gloves.

One more look around, one more check. Straker there in the background with Harper. No one else, no onlookers who might see something. The evacuation of the area had been efficient and thorough. After all, unexploded wartime mines still turned up after being buried for years in the mud of the river bed. A convenient excuse and anyway who was to say that there wouldn’t be an explosion here, later.

‘SHADO leader here. All units sound off.’ Straker’s voice was loud in his ears.

He swallowed, the sound loud in his ears. ‘Sierra Team. Ready.’ He wondered if his voice betrayed his nerves. He shifted the strap of his rifle again, shuffled his feet and looked at the entrance, waiting for that peculiar ‘open’ sound that precedes a radio message.

‘November Team confirms ready.’ Lt. James, sounding hushed and controlled. Out of sight on the other side of the river. Paul held his breath, waiting as the calls continued. He pulled his goggles down. Any moment now.

The teams reported in. Skydiver ready, medical support teams on standby, the two purloined SBS inflatables patrolling in stealthy silence, unlit and unseen. Everything in place. It was up to Straker now to order the operation. Paul waited, forcing himself to breathe, his heart pounding.

‘This is SHADO Leader to all teams. You have a Go to commence. I repeat Go to commence.’ Straker’s calm voice was the catalyst and Paul was moving even before the message had ended to lead his team through the doorway and sweep through the upper part of the glass domed structure. He ran down the rusting spiral steps, aware of the threat of aliens and searching for any movement, anything untoward as his goggles turned the blackness of the unlit space into monochrome gloom. Shadowy figures followed him as they cleared the steps down to the tunnel entrance.

He clicked his radio. ‘All clear Commander.’ A terse message. Paul was busy deploying troops by the time Straker had joined them at the bottom of the steps, Dr Harper close behind him.

‘Colonel.’ The brief word from Straker was sufficient. Paul gestured with a sweep of his hand to begin the careful exploration of the tunnel itself. The movement behind him made him look round in concern. Straker was stepping closer, wanting to get involved and be part of the rescue.

‘Sir. Wait here. I don’t want to have to leave someone to watch you.’ A command.

Straker froze, then,  nodding, stepped back from the tunnel entrance to separate himself from the group. ‘Very good Colonel.’ It was more than compliance, it was his tacit acknowledgement of Foster’s leadership.

No time to worry about hurt feelings though; the tunnel entrance was waiting.

Silence, not even the squeak of soft soled shoes moving in stealth over the damp paving slabs. His breath hissing in his ears, sweat between his shoulder blades despite the cold and his protective vest.

Down the long slope, the air tinged with the sour smell of vagrancy and neglect. Nothing. No movements ahead, but that was no reason to lower one’s guard. Foster paused before they reached the main stretch and held up one hand.

Instant obedience as the team halted. Once they reached the level section they would be exposed to the view of anyone, or anything, ahead. He flicked his radio, whispered, ‘Sierra to November. Ready to advance,’ tensed himself and, with senses sharp with adrenaline, ran down the slope to the main body of the tunnel, dropping to the floor to aim his weapon down the dark tunnel.

The others clustered behind, kneeling or flattening themselves against the white tiles that were filthy with scum and graffiti and who knew what other malodorous grime, breaths frighteningly loud in the silence.

All clear. They moved on with cautious steps, searching for booby-traps, listening for any untoward sounds. Despite the colourless shadows he could see movement ahead and he stopped, waiting, finger tensing on the trigger. A double blink of a single light. James’ team.

Still no haste, no incautious or impetuous dash to their target. Too much at stake here, and the last yards covered with as much care as the first, until the door was there, set back and almost unseen. Paul looked around as the other team came up to join them.

‘So far so good.’ One quick grasp of James’ hand before he flicked his radio. ‘Sierra to SHADO Leader. Tunnel secured. Next stage about to begin.’ He could hear a pause as if the Commander wanted to say something in reply, but then the radio went silent. And after all what could Straker say to him that hadn’t already been said. Paul knew what would be happening now; Straker and Harper would be coming along the tunnel; coming to help rescue Alec.

The keypad lock on the door was new, with no signs of damage, but it yielded with a loud snap of breaking steel as Franklin levered it off with a heavy crowbar. Paul swung his gun up, expecting to see the door bursting open and the aliens counter-attacking. The group stood, frozen, waiting. Another soft rustle, a movement behind and Paul spun around, ready to fire. Straker. And Dr Harper. Approaching on cat-like feet. They halted as Foster raised his hand.

Seconds passed, long slow seconds. Dragging out into minutes. Slow exhalations of air. Straker and Harper standing apart and safe. He glanced at them, once, their eyes hidden behind the goggles, their dark clothes hiding them from casual view.

He turned back. This was his responsibility, his call. ‘Now.’ It was not a question, it was an order. A quiet shuffle as three men moved into position. Franklin grabbed the door handle, tested it, an almost imperceptible nod of his head to indicate he was ready, and ….. the explosion of activity as the heavy metal door was dragged open and the three stormed the antechamber was almost a relief after the stillness.

Empty, as they had hoped. Paul beckoned the rest of the team inside and began exploring the cabinets that lined the walls. Electricity transformers and back up generators in case of power failure to the lighting or air pumps, emergency first aid, even cleaning equipment. No signs of aliens.

The far wall opposite the door had once been covered in white rectangular tiles like the tunnel itself, but in one area the wall had been removed and replaced by what appeared to be thick plastic material. Paul had seen something like this before. Underwater. The alien dome deep below the Atlantic. But this had to be below ground, below the river bed.

He pulled out his knife and with the utmost caution scraped the blade over the surface of the material. No scratch, no marks. Thompson had not gone beyond this point, and had no idea where the aliens had come from, except that they had met him here in silence. But Paul knew where they were now and knew how to get to them.

‘Listen up.’ He drew the teams closer, murmuring his instructions to them even as he could see Straker there, in the doorway watching, wanting to be in on the action. To be doing something. The teams moved away again and Paul went over to his commander.

‘Ed? Stay here until it’s secure.’ He saw the aching need in Straker’s strained face, even though the eyes were hidden from view. ‘Until we know it’s safe. You and Dr Harper.’ He lowered his voice. ‘Please?’

Harper put her hand on Straker’s arm, spoke in a tone that Paul had to strain to hear. ‘You know he’s right Commander. Wait here.’

Straker pulled away from her, turned away from them both and Paul Foster could see the effort it took as the SHADO leader brought himself back under control an spoke. ‘Carry on.’

The smooth plasticised surface felt cool under his hands. He knew that everyone was watching, holding their breath in anticipation of what would happen when he made that first slice into the sleek fabric. He had done this before, and so had Straker, but Ed was standing back as ordered. Out of harm’s way. He raised the knife and placed the tip against the taut membrane. Like a scalpel on skin. Pushed. Just the tiniest mount. The surface dimpled beneath the point, dimpled, rippled and ….. separated. With one stroke he opened a slit, long enough to pull apart the edges to let two of them get through, weapons at the ready to stand on the other side and hold open the gaping wound letting the others cross over.
Paul had one last look at Straker, standing there in the antechamber before the gash sealed itself once more, cutting him off from sight. 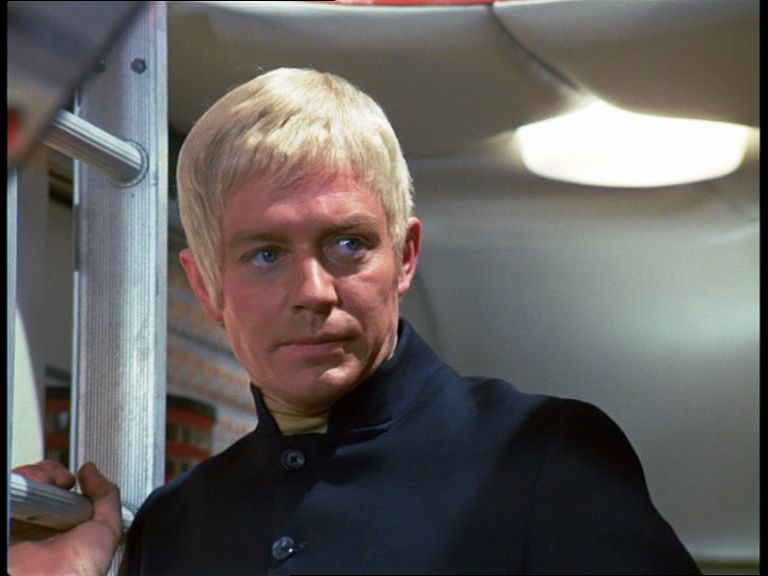