She was waiting for those first indications, the movement of eyes under closed lids, those slight twitches of eyebrows as consciousness slowly returned. She was patient, after all there was no reason to wake him. She sat there, watching the monitors, checking his signs, doing what was necessary. Alec was asleep in the other room, the deep slumber of a man who had been through hell and had returned. Sara had held his hand while he had fallen asleep, had stroked his face, had kissed him and then had left him to rest. She had checked on Ford, spoken to Jackson and then had opened the door to the High Dependency Unit. There was only one bed occupied.

The nurse had glanced up from her magazine to exchange a look before leaving her there to sit and watch. Sara had nowhere else to be right now. This was important. To her, and to Alec. She was doing this for him. For Alec. But also for Ed, lying there with no-one near to care for him. to hold his hand. To be there when he woke.

Time passed. Signs of stirring. His eyelids flickering, fingers jerking and a change in the rhythm of his breathing, becoming shallow and stilted as if it was painful. She stroked his face, wanting him to feel the touch of another person. It should be Alec here, or Paul, but Paul was busy in headquarters. There was no one else. No one who was close to Straker.

It was time. ‘Hello,’ she murmured, her hand soothing his face. ‘You’re safe now. I’m here.’

He gave a soft groan but his eyes remained closed as if he feared what he might see if he opened them. Perhaps the water pouring down from above, or Alec’s hand pressing flat against his, or even those small bodies, lying there. His children. His sons.

A hand on his face. Rebecca? But then there was the memory of her running from the room, and he turned away from the hand, opening his eyes to see who was there with him.

‘How are you feeling?’ She leaned over him.

He looked listless, the spark gone from his soul, washed away by brackish water and memories that swamped him. Eyes dulled by more than tiredness and a weary apathy evident in the way he regarded Sara.

‘My chest hurts.’ He gasped another breath. Pain in his breastbone. Deep bruising and a sharp ache. He knew what had happened, what they had done to him. He had dealt with worse than cracked ribs. Physical pain eased in time. It hurt to think of Rebecca as well. But there was no cure for that. Nothing would soothe that ache.

He lay still as Sara checked him over, not even flinching when her cold hands touched bruised ribs. Flesh would heal.

‘He’s fine. Sleeping right now. So is Keith. Don’t worry.’ Dr Harper finished and tucked the sheet back over her patient. ‘You had a bad time back there. How are you feeling?’

He turned his face away and tried to push the pain away as well, but it consumed him. Sharp and acid in his mind, fluttering and pawing in his chest and that empty desolation deep within. And the fear. That was the worst. He felt his heart race again and tried to swallow down the terror as he had tried to swallow the salty water. But it was hopeless.

However much he tried to drag the calmness back into his mind, to rise above the encroaching tide of dread he was unable to stop it and hands that had stretched out in desperation now tightened under the covers, unseen.

Eyes closed, not to stop the water blurring his last sight of life but to stop his emotions betraying him. How could anyone understand what he was feeling? He lay still, afraid that if he spoke his voice would reveal the truth. If only Sara would leave him alone, leave him to sleep.

The mattress creaked as a weight settled on the edge beside him. A cool hand rested on his forehead and he kept still, rigid with the fear of what she was going to force him to reveal.

Nothing mattered anymore. Alec was safe, and Sara would look after his friend. It was not as if Rebecca wanted him, she had made that quite clear. She wanted someone reliable, someone who was there for her, who would not lie to her.

He pulled away from that hand, as if he did not deserve the comfort of her touch. He had made so many mistakes in his past, so many foolish errors and this was his penance for all the wrongs, the lies. For failing John, for failing Rebecca.

He reached out to feel on the cabinet for his keychain. ‘Do one thing for me. Take Rebecca’s key and give it back to her. And then leave. Please.’ He waited for her to go.

The answer was not what he expected.

He opened his eyes, pushing himself up despite the stab from cracked bones. ‘You saw me die. Well, congratulations Dr Harper, you managed to bring me back. I assume it was you?’ He lay back on the pillows, gasping with the effort it had taken. ‘You know nothing about what happened to me. Go. Please.’ There was acid in his voice now, and more than sourness. An emptiness as if he had no future. As if his past was a horror that had consumed his existence. She could not bear to look into those eyes that were so full of self-loathing.

It was no good forcing him. She got up. ‘Maybe later. When you feel better.’ The door closed behind her and he lay there, waiting until the burning pain had eased enough for him to take shallow breaths again. He would get through this; the terror, the panic, the recollection of the water beginning to fill the capsule and the way he knew, even then as he was trying to open the door, that the aliens had won. But he doubted that he would ever get over the memory of raising his gun, of pulling the trigger, and watching his two innocent children die.

The nurse re-entered the room and he closed his eyes and pretended to sleep.

Jackson was waiting outside the HDU, leaning against the wall with an almost indolent look, but Sara was not deceived by his half-hooded gaze.

‘He’s awake, but I don’t think he’s going to talk to anyone. I didn’t get very far,’ she admitted with a frown.

‘I will leave it for now I think.’ Doug Jackson cast a glance over at Straker’s room. ‘Perhaps when he is at home it might be easier.’ He sighed with frustration. ‘The past weeks have been hard enough for the commander and this latest incident concerns me. I think that there is more to what happened than we are aware.’

‘Is there anything I can do to help?’

Jackson shook his head. ‘I think it would be more prudent for you to take Colonel Freeman home. Maybe…’ he paused and stroked his chin, ‘perhaps together, you might come up with some solution that would help the Commander. Alec Freeman is closer to him than anyone else.’ He stopped talking and looked at Sara. ‘But that will have to wait. Go home, Dr Harper. At least go and get some rest.’

Her reluctance was obvious and Jackson watched the indecision on her face. To stay here in the faint hope that Straker might relent and talk to her, or to wake Alec and take him home. Jackson placed a hand on her elbow ‘Dr Harper, do I have to order you? Colonel Freeman will sleep far better in his own bed.’ His hand twisted in a gentle touch and she found herself following his lead and heading back to where Alec was still asleep. She looked down at him and as she touched his face he stirred and looked at her.

‘Come on. Let’s go,’ she whispered, close to tears and she leaned over to kiss him again. 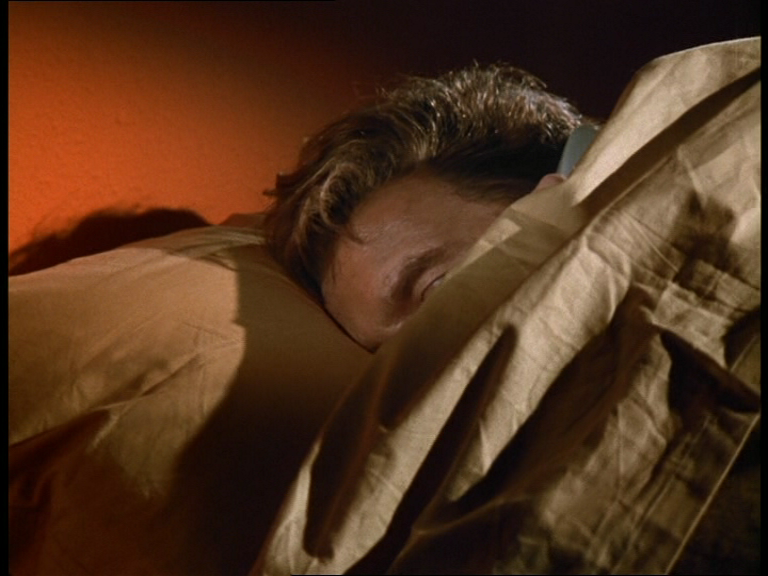