Alec sat hunched and silent, the mug between his fingers, watching cream swirl in the chocolate. ‘Did you speak to Ed? Was he alright?’

‘He was awake. Worried about you. I told him you were fine.’ She put her mug down. ‘You will be okay won’t you?’

He put one arm round her, lowering his head onto her shoulder. ‘Don’t.’ She felt him shudder before he sat up and stared across the room, leaning forward and still shivering. ‘Hell, I’m cold. Let’s go up and get warm.’ He stood up and held out his arms before he looked at her in concern. ‘What’s the matter?’

She shook her head, unwilling to burden him with her concerns about Straker. Alec had his own nightmares to deal with without her adding to them.

There was nothing for it but to be honest. ‘It’s Rebecca. She came to my house. Saw Ed there with me. She thought he had been lying to her and………..’

Alec closed his eyes in despair. ‘And he couldn’t tell her, could he. Damn. How bad?’

‘Bad? How bad do you think. Ed was… well… devastated I think is the only word. He refused to talk to me about her. Told me to give this back to her.’ Sara pulled the key out of her pocket. It lay there on her palm, glinting in the soft lights. ‘Alec, when I left him he seemed to have given up. He was angry that he was still alive. But I think there’s more to it than that.’ The key clinked on the glass surface of the table. ‘Something happened and he won’t talk about it.’

Alec pulled her close in a firm hug of reassurance. ‘There’s nothing much we can do right now. Maybe tomorrow. Now I …’ he looked at her. ‘I just want to hold you.’

Later that night, after they had talked, after Sara had told him of his clone and Ed killing it, after she had cried against the warmth of his chest when she remembered cutting into that cold body, he had comforted her with gentle kisses. Nothing more. But it was enough. She lay there next to him with her arm over his chest and her head on his shoulder. Asleep and snoring and he smiled a little in the darkness before the memory of recent days returned to make him shiver and snuggle even closer.

But he could not settle, despite his tiredness. His mind continued to return to the horror of waking and realising that he was a prisoner of the aliens. He lay there, trying to sleep, yet also fearful of the nightmares that sleep might bring. And it was not just his own experience that had affected him; lurking there in the dark recess of his thoughts there was the image of Ed trapped in the airlock as the water flooded into the space. His friend, drowning, dying. Too many horrors, too many flashes of dread when he closed his eyes.

He needed to sleep if he was to have any chance of overcoming this. He closed his eyes and forced himself to relax.

Rebecca lay in bed, eyes closed. The night light was dim enough not to keep her awake, but she could not stop that image reappearing in her mind. Ed. Standing there as Sara caressed him. Her eyes were puffy and hot; her face felt swollen and tight but her mind hurt most.

She had opened herself to him, touching him, kissing him, and even now her hands clenched in an attempt to drive away the thought of his skin under her fingertips. The feel of his throat under her lips, those short bristles that she had stroked with such a casual gesture. And he had kissed her as well. He had held her, had caressed her. And yet it had all been a lie. She felt sickened at her own stupidity, her trust. At least they had not……

She flung back the covers and went to the bathroom to shower yet again, drenching her hair and her face and her body in cooler water in a vain effort to wash away the memory. His razor was still by the sink and she picked it up and tried to break it in two, but it was too strong and in the end she threw it into the bin and flung the facecloth on top of it. Too many memories. She would get the lock changed later. And her mobile number. As for Sara… that betrayal was the hardest to bear. She was alone now. Completely alone.

The living room was in darkness and she made her way to the chair, curling up and waiting for this interminable night to end.

Doug Jackson touched the woman’s wrist. The pulse was still thready and erratic, but she was alive. There was no need to use his fingers for this, the monitors did a more accurate job in all respects, but he was an old-school physician and respected the traditional ways. That simple contact of fingers on her wrist might comfort her, might get through to her subconscious. He hoped so; he hoped that Chloe Rimmer was strong enough to survive. Not just the physical ordeal, although that was severe enough, but Jackson was a specialist in mental trauma and as he looked down at the woman he shook his head. Oh, they had closed the opening in her throat, they had treated the sores and the other physical conditions, but she had to wake sometime and face the memories. He might use the amnesia drug on her; at least to ease the worst of them. He would look into it later. Right now he had other patients to see.

He checked on Keith Ford; resting well and due to be released as soon as he woke up. Looked in on the three casualties from the assault who were also sleeping. Walking wounded. They had been lucky to escape with so few injuries. And that left only one patient.

He stood outside the door to the HDU wondering what he could do or say. Probably nothing, but his professionalism and his concern forced him to take that first step and push the door open. The dim light revealed a figure lying flat on his back. There was no movement, no acknowledgment of Jackson’s entrance and yet the doctor knew that this patient was awake and had been so for a long time.

Now that the patient was recovering there was no need for a nurse on duty so Jackson pulled up a chair and sat down. He would wait. There was no rush. The man in the bed knew he was here, and that was all that mattered. If Straker wanted to talk he could do, but Jackson would not force him. He was here. He would wait.

He watched as fingers gripped the sheet.

Paul tossed the paper cup across the room, grinning as it landed in the bin. He leaned back in the chair, putting his hands behind his head and stretching his shoulders as he yawned. The debriefs were done, the updates in hand, he’d organised a clean-up detail to erase any evidence that might remain and all that was needed now was to finish writing up his personal report.

He hadn’t heard from the Medical unit. But Jackson would have contacted him if anything had gone wrong. Alec was safe, as was Ford, but Ed had been his main concern. The cold body, the blue lips, and standing there watching as he died. That had been the worst part. Being helpless and unable to do anything as the water rose.

But now it was over. He paced round the desk unable to settle to any task, wide awake despite the late hour. Just that report to do. But he couldn’t concentrate on it, couldn’t unwind that tight coil of exhilaration. He did not want to go home, even though Colonel Lake was on her way in. He began fiddling with a pen on the desk, starting to write, then screwing up the paper and tossing it into the bin to join the crumpled paper cup.

Perhaps he should walk over to the Medical Unit and see what was going on there. Jackson would have been in touch if there was a problem, but it would not do any harm to check for himself. And there was no way he could sleep until he knew that Straker was on the mend. He would make one quick visit and come back to finish his report. Maybe then he could relax, get over this feeling of elation. It seemed wrong to feel this way, knowing that his friends had been hurt, but dammit; he had done a good job, and he knew it. And Ed was alive. That was more important than anything. Anything.

Jackson sighed. It had been over two hours now. That was of no concern, it was merely the passage of time, but Straker was still awake. During those two hours the man in the bed had, with imperceptible slowness and caution, turned his face to look at his visitor through the slightest of open eyelids. It had not made any difference. Straker still lay there as if asleep.

‘Enough. I’m not going to force you to talk, Ed.’ Jackson leaned forward, his voice soft and concerned. His use of Straker’s personal name made the man in the bed open his eyes a little more. Not enough for Jackson to see the dark pupils, but a glint of white now. He stood up and inspected the IV in Straker’s hand. ‘You need to sleep. And I don’t think you are willing to do that.’ Jackson pulled out a syringe and injected the contents into the connector. ‘There. Get some rest, Commander.’ He patted the fingers of the hand that lay on the sheet. ‘I’ll be here for a while longer.’

The eyes slowly closed, and Jackson watched as Straker fell asleep, muscles relaxing at last and the face of the SHADO Commander settling into a rare look of peace. 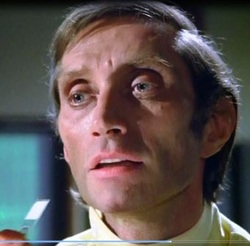