Mr. Dale Atwood. The envelope looked important and official and he panicked for a moment as he wondered who could possibly have a reason to write to him. There was a temptation to throw it away without opening, and in the past he had done that with letters from the banks and building societies and credit companies, but he turned the envelope over with a trembling hand and read the return address.

One finger slid under the flap of the envelope, fumbling it open before pulling out a single sheet of paper with that distinctive logo at the top. He read through the letter with disbelieving eyes. Tomorrow morning. An interview, tomorrow morning. And that name below the signature. He folded the letter, and tucked it safe in his pocket then he hurried to his room to get out his decent pair of trousers and get them clean and pressed. A shirt as well. And a tie. And polish his shoes. And he had better check up on bus timetables as well. Or perhaps a train. He wondered if he needed to get his hair cut.

The last document was completed and Miss Ealand slid it into the appropriate folder before opening the safe to put away the day’s work. The small box was sitting on top of the folders, and she lifted it out, wondering what to do with the gift. It was unlikely that her boss would be back at work for several days yet, according to Paul Foster, and she held the box for a moment, remembering those words. Keep it for me and I’ll take it round tomorrow.’ It was too late in the day to do anything with it right now but she would have it couriered out tomorrow morning to Miss Steel. And with any luck the commander would be out of hospital in a few days. She put the box in the safe.

Fuck. Rebecca knew that she looked like one of the guys after a binge. That half-vacant look of confused exhaustion. She slumped in her seat, too weary to even bother getting a coffee to help keep her awake. The bastard. The bloody cheating bastard. And yet the worst thing was that she didn’t hate him. Not like that. Not that satisfying hatred that gave you strength. This emotion drained her. She just wanted the hours to pass, to get through the next day, and the next and the next. It seemed to stretch out ahead of her … grey and interminable and empty. There was no physical pain this time, no need for morphine to blur her mind, but in a way this was worse. Her mother had been there last time, and Sara, but now there was no-one. She used to think that nothing could be as bad as that time, but …………. she shook her head.

She had done it before. She could do it again.

It was cold in the office, or perhaps it was just that she was so sodding tired and even in the thick cardigan that she had dragged out of the back of her wardrobe she was shivering. Who gave a damn what she looked like anyway. He certainly hadn’t cared had he? Shit. The tears started again and she dashed them away with an angry hand, scrubbing until her eyes felt raw.

It was no good. She was a fool to have come in today. She couldn’t settle, couldn’t even think straight. And she had work to do right now, things to sort out, important things. She went through to the kitchen to talk to the cook about the Christmas rota. Dale was scuttling through the common room on his way to his room, and she was about to call to him, but he had gone.

‘Alec?’ Sara rolled over and looked at him as he lay there. ‘You were calling out in your sleep.’

‘Not nice dreams either from the way you sounded.’ She touched his shoulder and he opened his eyes. ‘How are you feeling?’

He rolled onto his back, to stare at the ceiling. ‘I am ….fine.’ He wasn’t though. The nightmare might be fading into the darkness of his mind, but the feeling of horror was still there. That heart-pounding realisation that the aliens had captured him and all he could do was to lie there, imprisoned and unable to move, waiting for the first touch of a knife. Those long waking moments of consciousness and coldness and fear. Being trapped and helpless. He pushed the sheets away and swung his legs out of bed to sit on the edge and breathe great gasps as sweat cooled on him.

He shivered and she got out of bed to come round and sit next to him, her arm around his shoulders,

He couldn’t tell her. Couldn’t bring himself to admit that he was utterly terrified, that he wanted to hide where they could not find him. He turned away, ashamed of such a primitive reaction and she pulled him close and looked into eyes that were dark with terror and the fear of the unknown, and Sara had no idea what to say or do. She could only hold him as he flung himself into her arms, as ragged and silent sobs shuddered through his body. He clung to her and buried his face in her shoulder as his fingers dug into her flesh. A hard and painful grasp, but she held him and made no sound. His breathing deepened and then the black terror splintered and was gone under the touch of her hand. The release of tension unchained his need for her, and he took her, thrusting himself into her as she opened herself to him and their bodies came together as one; deep and intense and sharing.

Straker woke up. No one in the room with him this time and so he eased himself up to sit on the edge of the bed as his tentative fingers explored the extent of the bruising on his chest. He had no idea what time of day it was, other than it was light outside, and he reached out for his watch. His hand caught the key chain that was there. His keys. That was all now.

He lay back. There was no reason to get up. Nothing that he had to be doing. The IV had been removed sometime while he was trapped in that drugged and somehow unsatisfying sleep, and although he still ached and felt drained he knew that the worst was over and that he would be going home, maybe even today. To what though? An empty house? Being alone again? There had to be some comfort in the fact that he had survived and that his memories had returned but there was a desperate sense of loss as well and not just the loss of Rebecca. Those days at the Shelter had made him realise that he missed the simple pleasure of companionship, the quiet moments spent sitting and watching television and having friends around him. And yes, they were friends. They had accepted him, had included him and had cared about him.

He sat up again, wincing with the discomfort and remembering Dale helping him in the medical room, making him a drink and breakfast, and he wondered how the man was doing. There had to be some way to repay Dale. Perhaps Miss Ealand might have an idea. For now, he just had to concentrate on getting out of here and getting over the memories. All of them. If that was possible.

The door opened and he looked up, half-hoping to see Alec, but no, it was Jackson, looking tired.

‘Commander.’ The smooth drawl had an air of satisfaction to it, a note of victory, as if Jackson was gloating. Or perhaps it was his imagination.

‘Jackson.’ Straker refused to be drawn. If the doctor wanted a conversation then he would have to make the first move.

‘Did you sleep well?’

‘Yes. I slept.’ A curt answer. But it was the truth. He had slept. If not well. He couldn’t remember all the dreams though. Not properly.

‘Good. I am going off duty. Shroeder will be along to check on you and I have recommended that you stay here one more night just to ensure that there are no unforeseen complications. You can go home in the morning. I will see you then, no doubt.’ Jackson nodded a brief salute before leaving as quietly as he had entered.

Straker lay back and waited. He would get through this. Somehow. 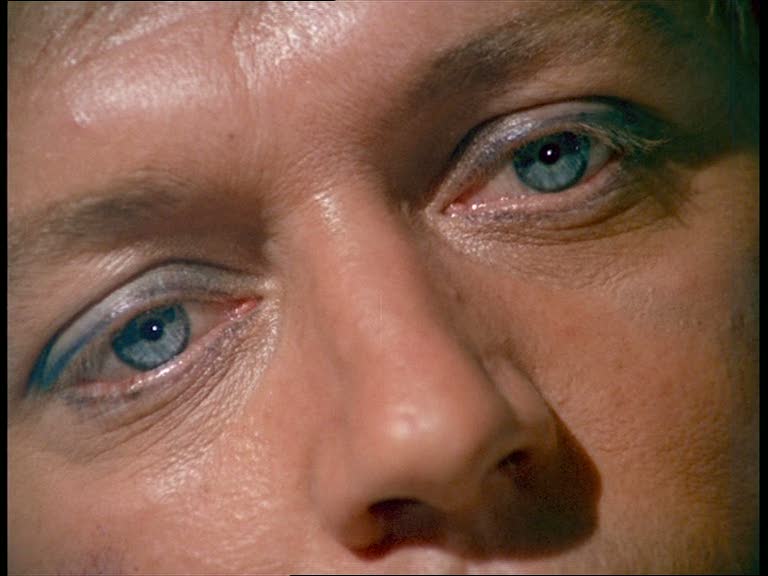