It was late morning by the time Rebecca arrived at the Shelter, her hair still damp from a quick shower, and her mind focussing on things other than work. She paced her office for a while, unable to settle and wondering what Ed was doing. If he was alright. What should she say to him? What words might he say to her? He had drowned. Dear God. When Alec had started to tell her about it, he had crumpled somehow, had turned away and been unable to continue and Sara had carried on in her calm and clinical voice. All the details. Everything. Apart from why and where. It was enough to know that Ed, her Ed, had been trapped and they had watched as the water flooded in. She wanted to go to him now. Not have to wait until later. Now. Even if he was in the hospital. Except.,., they wouldn’t even tell her which hospital. She started her work, looking at the phone and willing it to ring.

It seemed forever before Alec called. A brief message, but it was all she needed to hear. She grabbed her coat and hurried home, heedless of the cold. But once inside the sanctuary of her home the doubts struck her. He might refuse to see her. He might treat her with the same callous contempt that she had shown him, casting her aside as if she was nothing.

Her hand trembled on the banister and her legs felt weak, but she dragged herself upstairs to change. It had to be done. She had to know. And he had the right to tell her. Whatever he said. He had been blameless, and she had been so wrong, so thoughtless, so demanding.

She got ready and picked up her keys.

The winter weather had frozen the ground and had made impossible any thought of digging over the borders that edged the lawn. Straker unlocked the shed. The wooden door was swollen and caught on the frame and he had to jerk it to get it open. The old apple tree had been cut down in the summer, not from choice; the branches had been creaking with age and the trunk leaning at a precarious angle. It seemed wrong to hack down such an old tree even though he had known that it was past its usefulness. He couldn’t even recall when it had last produced a decent crop. He had planted another of the same variety nearby and his chainsaw had made short work of slicing the timber into pieces that he had stored in the shed, though why he had done so he had no idea. It was just that the tree deserved better than to be cast aside, as if it was no longer of any value. He had considered cutting it into neat rounds to use as edges to the vegetable beds, or even piling it up in the far end where the untamed area of the garden attracted wildlife.

Today he was going to deal with it.

The axe was dulled by disuse, blunted and rusting and he immersed himself in the simple task of oiling it before he set about honing the edge on an old whetstone. Pure physical activity. The rasp of metal on the stone. The satisfaction of seeing the metal shine, of watching as the blade returned to its rightful condition.

He lifted a piece of wood and carried it out. It took a moment to stand it upright, to swing the axe down and splice into the dry wood. The satisfying crack as the blade sank deep and then the wood was lifted and thumped down again, and again on the paving slab. His cracked ribs shouted at him to stop, but he ignored them and pushed on, pushing the axe down, pushing the pain away, pushing the thoughts to the back of his mind.

The stack of split logs grew. He stripped off his thick winter jacket to draped it over the garden bench before he carried on. The rhythmical sound of metal on wood, the clunk of the splitting timber and the creak of the pieces as the axe tore them apart. He wiped welcome sweat from his face, gulping down a mug of water that was so cold it made his teeth hurt, pulled another log out of the shed and set to work. There was nothing to distract him from his task and he had to concentrate on every move, even to controlling his breathing.

There had been time to think about things as she drove to Ed’s house. Time to remember those certain moments that she kept as secret as the other world that Ed inhabited.

Secrets. A world of secrets. Was she ready to be part of that? To accept what he told her, to not ask questions, to wonder what he was doing on those evenings when he was busy? A night shoot. What did that mean? And anyway, even if she did get to see him tonight, who was to say that he wouldn’t look at her with contempt. She had been a fool and he had gone to his death knowing that she hated him. Her hand tightened on the steering wheel until her fingers hurt. She might never have had the chance to put things right.

He could have died. The image was there in her mind. She knew how he had felt and how frightened he would been. She had been there as well. That desperate gasping for air, the struggle to breathe as ribs hurt and burned and eyes were blurred from tears. Those last terrible thoughts as he knew that he was going to die alone and without anyone to embrace him or love him. Alone. No one there to hold his hand and caress him.

Then that moment when death was forced back and consciousness dragged you into a world of pain and nightmares and despair. And you hoped that there was someone there beside you who cared.

He could have died. And she would have killed him as surely as if she had held his face under the water, and she would never have been able to tell him how she felt, how wrong she had been.

She pulled up outside Ed’s bungalow, to see a somewhat familiar figure just letting himself in at the front door. Jackson. That was the name. She sat in the car waiting. If necessary, she would wait all night.

‘What do you think you are doing?’

The sharp voice startled him and he dropped the branch that he was dragging. ‘Jackson? Why are you here?’ Straker laid the axe down on the bench and picked up his jacket. The temperature was close to freezing and he could feel the sweat begin to turn cold on his body. He faced the doctor, unwilling to offer any explanation or justification for what he was doing. This was his home, his personal space and he could do what he wanted here, couldn’t he?

‘I came to see how you were feeling, Commander.’ That soft voice, that voice that threatened him with its compassion and its pretence of understanding. ‘I did not get to see you before your discharge this morning, and I was concerned.’

Straker shivered, not from the chill of winter ice, but from the fear of what Jackson might expect from him.

‘Me. I am fine. Just…’ Straker waved a hand at the pile of split timber. ‘Just catching up on jobs.’

‘I didn’t realise that you had a wood burner in your house, Commander. But you should have left that task for a few weeks. I am sure you must still be in some discomfort.’ The question hung like ice crystals in the air.

‘Wood burner? No, I…’ Straker paused and looked down at the kindling. Why had he done this? What purpose had it served, apart from make his ribs burn and his body weary. Respite. It had taken his mind off the nightmare. That was all. ‘I…’ He stood there, his mind a blank before he bent down to lift the axe from the bench with the intention of putting it away. A hiss of discomfort escaped him and Jackson stepped forward to take the heavy implement from his hand.

‘Go inside Ed. I’ll put this away for you and then we need to talk.’ He held Straker’s gaze with his own. ‘No excuses this time, no evasions.’ He waited until the other man had trudged into the house, then put the axe away, scooping up the wood and dropping that inside the shed as well. The door complained as he forced it shut, but he pushed his shoulder against it and it succumbed.

Straker was in the kitchen watching him but as Jackson went up the path and opened the back door he turned away, putting both hands on the work surface and staring down at them.

Jackson hesitated for a moment despite knowing what was needed. Then he stepped forward to placed his hand around a shoulder, feeling muscles tightening with fear. ‘What are you afraid of?’ His voice was almost a whisper. He waited for Straker to twist away, to turn around and face him eyes blazing with anger or icy contempt. But the man was still. His shoulders hunched now, yet still accepting that touch. The head lowered as if in contrition, the hands flat, fingers pressing down hard. A tremor ran through the man in front of him and the hands stiffened.

‘Afraid?’ The single word was almost inaudible. ‘You wouldn’t understand.’

Straker turned round. ‘And what if I don’t? What if I don’t trust you? If you don’t understand? What then?’ He walked over to the sink and washed his hands while Jackson, arms folded, watched in silence.

‘You have to trust someone. It might as well be me. Whatever happened, do you think it is fair to ask Colonel Freeman to help you? It would be an added burden for him, considering what he has undergone.’ Jackson’s voice was cold and he saw Straker flinch at the selfishness of his own thoughts.

‘There’s no need to involve Alec. No need to involve anyone, least of all you, Doctor. I will be back at work next week.’ He kept his eyes averted as he dried his hands on the towel. ‘As I told Doctor Harper, you know nothing about it. And,’ he paused and Jackson saw him swallow hard before he continued, ‘there is nothing to tell.’ He looked up and grimaced. ‘Believe me.’

‘Unfortunately Commander, I don’t.’ Jackson sighed. ‘We are going to talk. Like it or not. Either here, or…’ The threat was implicit. Jackson’s rooms. ‘Ed. You need to tell me. And I will listen. It goes no further than this room. But you will talk. You have to let go of it, of whatever happened.’

‘I can’t.’ Straker rubbed his face with a shaking hand, his voice even less than a whisper now. ‘If I let go Doug, I may never come back. There are too many horrors there.’

Straker looked up at the hard resolve in Jackson’s voice. ‘And you would. I know.’

He turned to look outside at the small sapling growing near to where the old tree had once stood. New growth. New hope. Grafted stock guaranteed to be healthy and fruitful. To flourish and mature. It had hurt to cut away the dead wood, but it had been the right thing to do.

He made his decision. ‘You’d better sit down then. This is going to take some time.’ 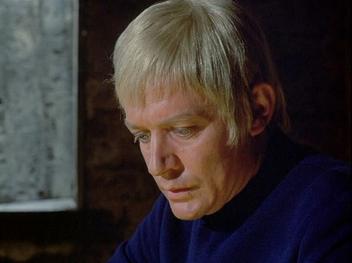