‘Let me see.’ Freeman pulled the monitor around and stared at the screen, frowning. ‘Call it.’

‘You heard me. Call security. Get them out there. Fast.’ Freeman waited, arms folded, eyes intent on the screen. The flat line from the vehicle’s tracker was enough to set his pulse racing. Flat lines were a rare occurrence, happening mostly when the car’s systems failed, or when …

He had seen this once before when Paul had somehow managed to total a SHADO jeep, causing considerable embarrassment to the young Colonel as well as raised eyebrows and a rare sigh of disapproval from Straker. ‘Any contact?’

Ford was flicking switches, listening to frequencies and ignoring, for the moment, the man standing behind him. He pulled off his headphones and shook his head. ‘Nothing. Security are on their way. Be about 5 minutes. It’s probably…’ His voice trailed off into an uncomfortable silence.

‘Let’s hope so. Call me the minute they arrive.’ Freeman moved away, glancing back every few seconds as he patrolled the control room, checking other consoles. No sign of the enemy. No recent incursions either, which was the worrying thing; no aliens in sight and now something wrong with Straker’s car. Add those together and you ended up with one answer. Trouble.

There was nothing he could do now, apart from wait. He counted off the minutes, convinced the team should have arrived at the site, and all the time hoping that right now Ed was cursing his vehicle. Simple breakdowns happened didn’t they? Even to SHADO Commander’s cars? But in that case, why hadn’t Straker phoned?

He turned. Ford had that look on his face, the one saved for serious stuff. Really serious stuff. He held Alec’s gaze with his own. ‘You might want to take this in the office sir. Line 3.’

A few quick paces, the door sliding shut behind him. He leaned over the intercom. ‘Freeman.’

Lockhart answered. ‘Nothing Colonel. No sign of the Commander’s car but the tracker has been removed. It’s still here. We’re widening the search.’

‘Where exactly are you?’

‘Slip road. Junction 1 on the M40. Hang on- ’ Alec heard muffled voices in the distance and shouting. He leaned harder on the desk as if by doing that he would hear better. ‘Sorry sir. Looks like the Commander’s car might have been involved in an accident. There’s fresh damage to the barrier at the crest of the sliproad. Dark grey paint and some broken glass. but no sign of the car. Or ….’

‘No one. It’s quiet here. Too early even for rush hour traffic. Only one or two drivers and we’re stopping and asking, but its a bit late now . If he’s been taken by – .’

‘I don’t think so. It’s been quiet here, too quiet.’ Freeman straightened up. ‘See what you can find out. Someone might have noticed something. Get the tracker back here. Forensics will need it. Freeman out.’

He turned away, staring at the walls, his voice a mere whisper. ‘Ed. Where are you?’

There was no answer. Freeman unfastened his jacket and took a breath; time to get organised. He sat down, fingers interlaced and elbows on the desk, thinking.

The intercom buzzed. The internal one, not Lockhart. Too soon anyway and his hand jerked forward to the switch. ‘Freeman.’

‘Colonel. Patching you through.’ There was no need to explain.

He listened to the unfamiliar voice filtering into the room, hearing a distinct a note of triumph in the words, and reacting only as the line went dead. Eight words. That was all. He paused, fingers trembling as he opened the internal line. ‘Ford. In here now.’ He was staring at the mural when the door opened. ‘Did you hear?’

‘Did you get anything?’

Ford shook his head, an infinitesimal movement of apology. ‘No. The call was too short. I need longer.’ He looked at Freeman. ‘I’ll set up a line. Maybe next time. Sorry.’ He shrugged.

Freeman nodded. ‘I don’t need to tell you to keep this quiet. I don’t want any panic. We have no idea what they’re after, and he could be released soon enough.’

’The woman said they had Ed Straker. Not Commander Straker. It could be an everyday kidnapping, studio executive and so on. It’s always been a possibility but there are plans for practically every contingency.’ Freeman stood up, his hands flat on the desk. ‘We pay the ransom. No questions asked. That’s the standing order. Always has been, since we started.’

‘If they know who or what, he is? Then it’s a different matter. God knows who they might be or what they might want.’ Alec Freeman straightened up, tightening his lips. ‘I’ll let you get started. We have to find him.’

Keith Ford nodded and walked out in silence, leaving Alec Freeman alone with his dark thoughts, hearing that soft voice once more. ‘We have Ed Straker. We’ll be in touch.’
…………………………
The light was blinding, or perhaps it was just that his head ached abominably. It would be sensible to keep his eyes closed until the pain subsided and the dizziness eased. No point in trying to move and ending up vomiting everywhere. Past experience had taught him how unpleasant, and messy, that could be. Now it was just a case of working out what happened. An alien attack? An accident in the studios? He couldn’t remember much; everything was disordered and blurred, a nauseating confusion of flashing sounds and images.

He grabbed hold of one fleeting point of reference, clung to the image until it stabilized then let the memories open one by one.

It all settled into place.

The black Range Rover had been ahead of him at the lights again. The third time in a fortnight. Nothing too unusual about that; he changed his route and timing as much as possible, but there were only so many roads between his house and the motorway access. There were bound to be occasions like this.

Straker turned on the radio and adjusted the volume, letting his fingers tap along to the music. For one moment the thought flitted through his mind that perhaps he should take note of the license plate, but the lights changed and he slipped the powerful limousine into first and pulled away, following the other car, its driver invisible behind the dark windows. The slip road was still quiet at this hour of the morning and he accelerated in second gear pushing the car forward and starting to overtake the slower Rover. He noticed the same breakdown truck as on previous occasions, parked yet again on the hard shoulder.

That was the last thing he remembered. An accident. Nothing too serious. Nowhere else hurting apart from his head. Just concussion then. Best to lie there and let things sort themselves out. Sleep.

He heard a door open and footsteps. A voice. ‘Hello Mr. Strachan. How are you feeling?’ There was a pause, a hand on his wrist. ‘Edgar?’ and he opened his eyes in a sudden jolt of fear. 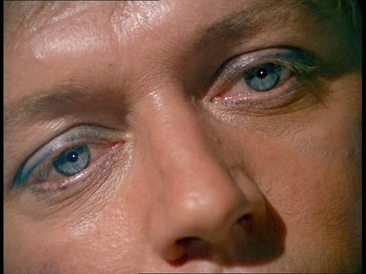