(A brief introduction to the series and why I write UFO)

This was the first live action TV series made by  in 1969 by Gerry and Sylvia Anderson whose earlier, very successful, ‘supermarionation’ series included Stingray, Thunderbirds and Captain Scarlet.

Gerry Anderson had produced two previous  live action films; Crossroads to Crime in 1960,   and Doppelganger (re-titled Journey to the Far Side of the Sun) filmed in 1968. Neither film was a success, although Doppelganger achieved cult status in later years. 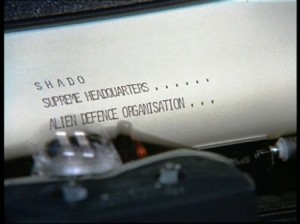 UFO’s  basic  premise is that in the near future – a fictional version of 1980 (a date indicated in the opening credits) – Earth is visited and attacked by aliens from a dying planet and humans are being covertly harvested for their organs by the aliens. The show’s main cast of characters are members of a secret, high-technology international agency called SHADO (an acronym for Supreme Headquarters, Alien Defence Organisation) established to defend Earth and humanity against the mysterious aliens and learn more about them. 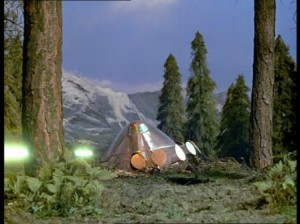 The original run of UFO was 16 September 1970 – 24 July 1971. There were 26 episodes and a second series was in the planning stage when the show was cancelled.

The show still has a cult following of hard core fans many of whom appreciated the dark, and sometimes very disturbing, themes in the episodes, as well as fans of the special effects used in the series, most notably the models of vehicles. 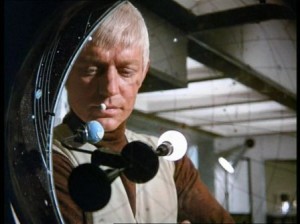 The main character, Ed Straker is portrayed as a complex and multi-dimensional character, who has sacrificed everything in order to do his duty, even to the extent of refusing to divert a plane in order to save the life of his own son. (A Question of Priorities) and willingly sacrificing his own life to ensure that the crew can  from  a trapped submarine (Sub-Smash).

It is that ‘darkness’,  that sense of almost hopeless resignation that made Straker the antithesis of gallant womanising characters such as Captain James T. Kirk. UFO episodes tended to end on a very down-beat note  (Identified, Flight Path, Survival, CCA-OK, The Square Triangle, Timelash, The Long Sleep, just a few examples). No one who saw that final shot of Straker alone in the hospital at the end of Question of Priorities could fail to appreciate the sheer angst of that scene, repeated in some ways in the final shot of the series in The Long Sleep.

It is the character of Ed Straker who makes UFO such an interesting fandom in which to write. Complex, damaged, repressed. We really know very little about him, and that, to me is the exciting thing. To be able to write stories that explore who he is, and moreover why he is like that.  If you read my stories you might realise that on the whole I try to stick to ‘canon’. That is, I try to make the characters behave as they would have done in the series (well, most of the time anyway!)

And for those of you who ask why do I do this?

The answer is simple.