I hadn’t stayed in a hotel quite like this before. Minimalist. The rooms are basic. Comfortable but .. basic. A large bed, bathroom ‘capsule’ I suppose they call it, a small niche to hang a couple of shirts. I hadn’t brought much in the way of luggage though. An overnight bag. That was all. Clean shirt, razor… that sort of thing. It was all I needed. This was a quick job, just an overnight stay, keep my appointment and then home straight afterwards.

I’d had breakfast and checked out. But I had time to kill so I went to sit in the lounge area. Plasma TV with Sky sports. The sound turned off, and a red band running along the bottom of the screen with ‘Breaking News’ subtitles. Big fat sofas. You know. The sort that look good in minimalist hotels. All red and black.

I sat back to watch the sports. Just for something to do while I waited. Time passed. I went into the gents. Didn’t waste time. I needed to keep that appointment.

The lounge was quiet, no-one else there. Which was fine by me. There are several things that I like. A good cigarette. A decent whisky. And to be left alone. Especially when I work.

I sat back and waited. The conference table by the window there in the corner of my eye. Minimalist, like everything else. Eight seats. No separate room here for business discussions. Everything out in the open, nothing to hide. Nowhere to hide.

Seven of them. They came into the lounge area, headed for the table and sat down. One of them in a brown pinstripe suit and hair dyed to camouflage any signs of age. Her bearing announced her as the leader, as much as her position at the head of the table. The others were unremarkable.

I watched them, intrigued by the snippets of conversation that floated across to me. Although ‘floated’ was a misnomer. It was hard not to hear them. Sharp dominant tones from the woman at the head, softer muted words from the others. All women.

But one was silent.

Although I sat there, trying not to eavesdrop, I found myself more and more drawn to listen, to try catch any random phrase or comment. Workshops, charities, portfolios, environmental impact, self-improvement. Financial allies. All the buzz words.

She stayed silent though.

The occasional nod of her head, her thick brown hair bouncing loose from where she had tucked it behind her ears.

One of the women picked up her bag, slung it over her shoulder and walked to the nearby cloakroom. Loud steps. The door clattered shut behind her. The conversation carried on. More buzz words; inspiration, websites, pre-empt, potential. The hiss of the espresso machine muffled further words.

I wondered what they were planning, these seven women. Some business venture, some get-rich-quick scam, or perhaps the beginning of an international organisation. Who knew? But that was not my concern. I had an appointment to keep. A job to do.

The cloakroom door clattered open. The woman returned, slipped her bag off her shoulder.. a white silk blouse I thought.. sat down. She had not been missed.

The one with the thick brown hair was still silent, unsure, nibbling at one fingertip as if to bite off a hangnail. Elbows on the table and hands clasped together, she hunched her shoulders. Her fringe slipped across her eyes but she let it lie there.

There was a small disorder as the brown pinstripe knocked a glass over. A sharp noise that attracted attention, made people turn their heads towards the small group.

I was careful not to look at them. Whatever they were up to it was none of my business. But she was an enigma.

The silent one. So separate from the others with their loud voices and confident demeanour. As if she had joined them with reluctance, maybe having been persuaded by a friend or a daughter. She looked uncomfortable.

Not just her physical actions. Her clothes as well. An ordinary outfit, the sort of thing you could buy in a thousand high street retailers. Nothing exclusive. A neat, almost prim, long sleeved blouse, neat prim skirt. I couldn’t see her shoes but I knew that they would be flat pumps. And tights. This woman would not be bare-legged.

No jewellery either. At least not the chunky necklaces that the others favoured, or a fashionable manacle-like bracelet. She was naked of that. The others all protected by an armour of designer clothes and heavy chains. But this woman had sincerity and innocence. Her naivety was both concerning and yet at the same time drew me to her, to wonder what she was doing here, with them.

You may be wondering why it is that I notice these things. The clothes people wear, their body language. Let’s just say it’s part of my job. Leave it at that.

I’d turned to watch the rugby on the television. Scotland versus Ireland. A friendly match, if any rugby match can be called friendly. Scotland just ahead in the game, although it was of little interest to me. The noise made me turn my head again.

They had finished. Laptops shut down, folders put away, the click of briefcases closing. Chairs pushed back, loud relaxed voices now and they grouped together for a photograph and to exchange perfunctory hugs. The required kisses. She hung back on the sidelines, not really one of them. An outsider.

They dispersed. Six pairs of stiletto heels tapping on the fake wood floor. Executive business women out for the kill. She looked over at me, saw I was watching and shrugged her shoulders, smiling as if she knew what I was thinking.

Scotland scored a try. I didn’t look at the television again, just watched her lift her jacket from the back of a chair, slip it on and then button it up. Every movement precise.

She picked up her briefcase. I noticed that it was new. Bought for the occasion no doubt. We shared another glance and then she headed for the exit. Silent footsteps.

I had not heard her voice once. I prefer that. It makes the job simpler somehow. Silence is the best way, and I can do it silently. And quickly.

It was time to keep my appointment with her. I picked up my case and followed, my knife ready in my hand. 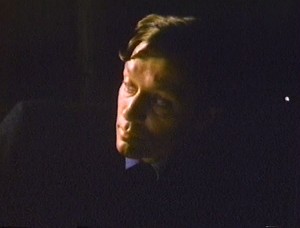 LtCdr. 09.08.11
Copyright Lightcudder August 2011
The original characters and story are the property of the author.

I started writing a character description, not a story and then realised that with a little work, the piece could well fit into the ‘Madame Claude’ fandom where Ed Bishop played the part of Mr Smith, a contract killer. This is the final result