‘I know how to fasten a bow tie, Alec.’ Straker brushed the hands away with a feeling of irritation. It was bad enough having the fluttery feeling in his stomach again, but Alec’s persistent questions and attempts to help him were only making him uncomfortable. A wave of heat coursed through him and he wiped his brow, expecting to feel sweat there, a fever, or perhaps the start of an illness. Too late to do anything now, the service in just over an hour, the honeymoon booked.  He would have to trust that he could throw off whatever it was, cold or flu. December was supposed to be the worst time for catching the virus.  He stepped away from his best man and turned to the mirror to fasten the thin ribbon in a neat bow, tugging the ends into position and giving one last tweak to straighten the knot. ‘Will that do?’ The touch of sarcasm was lost on Alec, busy getting Straker’s uniform jacket out of the protective wrapping and brushing it down with one hand to ensure it was spotless before holding it out.

Straker shook his head. The feeling of restlessness and unease increased, his head pounding now, his heart rate uneven, the fluttering in his chest making him light-headed and dizzy.  He sat down on the bed trying to calm himself, to bring his body under control; after all this was no different to any formal ceremony or gathering. The fact that he would shortly legalise his betrothal to Mary was no reason to feel this way. Or was it? He swallowed the fear down. ‘Alec, can I have a few minutes. Alone.’

A glint of concern flashed over Alec’s face then he nodded. ‘Sure thing. I’ll go and find out where the buttonholes have got to. Back in ten.’

‘Make it half an hour. Have a drink. We have time.’

A frown. ‘Having second thoughts?’

Alec paused, one hand on the door handle. ‘Thirty minutes. I’ll wait for you downstairs.’ He went out, and Straker waited, hearing the footsteps retreating down the corridor before going over to lock the door.

Could it be? Over the months since arriving here he had lost track of his biological cycle, had been too busy to even contemplate his old persona of a Vulcan with all its associated problems. He was human now, living as one of them, thinking as one, even loving as one. He had thought long and hard about proposing to Mary, but once he had considered every aspect, it was the logical thing to do; it would cement his life here on Earth, would ground him in the culture and give him a life outside Henderson and SHADO. He was under no illusions that he would be returning home to Vulcan anytime in the next few decades; supporting Henderson and protecting Earth would be a lifetime’s service. Good work though, and there were benefits. Mary and Alec and his friends here.  He took his pulse again before lying down, arms folded on his chest in preparation.

Pon farr. It might be too late to assuage his craving or even to calm the fever. But he would try. There were no drugs available here on Earth to help, and for a moment he wondered if he could somehow contact T’Lia and ask for her help, but he dismissed the thought almost immediately. The service could not wait. He would have to go into deep meditation and hope that he could ease the worst of the symptoms. He allowed himself one wry, human grin. Of all the problems that he had considered over the last few months, once he realised the strength of his feelings for Mary, pon farr had never entered his mind. He thought he was free of it, but the ancient Vulcan instinct was more powerful than any of the changes his body and mind had undergone.

He put aside the thought, stood and opened the window, the air chilling his lungs and cooling the heat in his face.  A few minutes breathing, then he closed  the sash, lay down, forcing  himself to relax and  begin the first of the mental exercises. They would help soothe him: they would cool the heat, ease that almost unbearable desire building inside him.

It took all his strength to control his breathing and slow the frantic beating of his heart. Minutes passed while he lay there, eyes closed, hands outwardly relaxed on his chest as he fought the urge. He was unaware of Alec returning and standing outside in silence before walking away down the corridor, craggy face lined with concern.

There was nothing here but the room, the slight ticking of the radiator, a thin caress of cold December air on his cheek from the window that was still open a crack. Memories filled his mind: T’Shaan’s last words to him, still deep in his mind – ‘Peace and long life, beloved.’ , the earth beneath bare feet as he ran to find her, that scrap of blue cloth, his years as a Student teacher in the Science Academy, the changes he underwent in order to get here and live as among the people he wanted to help. A slight smile marred the stillness of his lips. A resident of Earth. He had accepted that fact a long time ago. Ed Straker.  Human.

No going back now; today was more than commitment to Mary and a recognition of his feelings for her, it was his own acceptance that Earth would be  his home for the foreseeable future.  In seventy years or so, he might return to Vulcan to live his last years there, but even that was not set in stone. It was of no import though. He would happily live on whatever planet accepted him and he had made more friends on this vibrant world with its oceans and clouds and forests, than he ever made on Vulcan. Ochio was a different matter, but there was no point in thinking of what might have been. That part of his life was long over. He lay still, trying to concentrate, seeking that deep, pellucid calm that would enable him to enter the necessary trance.

But however much he tried, it eluded him, fluttering at the very edge of his thoughts like a butterfly and darting away whenever he tried reaching out. It was futile. Over the past months, with SHADO consuming every waking moment and invading his dreams as well, he had allowed his mental disciplines to weaken. It was a shock to realise that he could not do it, could not appease the craving.  There was only one hope; pon farr was a Vulcan syndrome, unheard of in any other sentient species. And he was no longer Vulcan, not fully. Not just by virtue of having red blood and the other physical alterations, but in those small changes that made it possible for him to be accepted.

Humans did not suffer from pon farr. Alec would be returning soon. He had to stop this, before it was too late.

He took a deep breath, welcoming the tension and fear, trapping it, letting it to grow stronger to push against the boundary of his control. The burn increased, pain in his body and bones, pounding in his head, making him gasp now. Shallow breaths as the tension cramped fingers and muscle. He forced himself to lie still, even though his muscles crawled with the need to move, to get up from here and run away; somewhere safe and dark and cool.  He resisted.

Humans did not go through pon farr. And he was a human. An man of Earth. He slowed his heart, let those emotions he had suppressed for so long, run free.  Joy and grief, wonder and fear.  Tears flowed from his eyes as he remembered T’Shaan, laughter on his lips as he recalled swimming with Alec, and cleansing warmth filled in his heart as he thought of Mary. His Mary. His life.

A new life ahead of him now.  One long, slow exhalation and the heat within died away, the urge fading to a mere shadow of its former strength, leaving him calm and at peace.

By the time Alec returned again, Straker was ready.

A life ahead of him, hard work and sacrifice, but he had come this far and survived. Who knew what the future would hold for him? He brushed one hand over his short hair to smooth it in place, smiled, and followed his friend down to the waiting car. 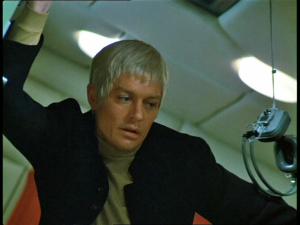 I know this breaks (shatters.??) canon in two different universes, but the idea was simply too tempting to ignore once I saw that photograph of Ed Straker looking just like a Vulcan. I have done some serious research about a couple of points in the story. The general consensus of opinion on the Star Trek sites is that although there were some blond Vulcans, these were very much in the minority. As Vulcan is a very hot and harsh planet, pale skinned and blonde Vulcans would be at a disadvantage to ones with darker skin/hair.

There were undoubtedly different ethnic groups on Vulcan, much as we have on Earth. These would differ in small degrees from each other and would have developed their own rituals – not religions- within their groups. Emotions were not suppressed by all Vulcans, they  were visible at times and were kept ‘controlled’ rather than banished. Alcohol was drunk, and vegetarianism was not the rule, though it was usual.

There is a reference in Star Trek to a medical procedure in which a human has her blood altered so that she can fit into Romulan society, only I have reversed the process.  (Hemoplasmic pigmentation tagging.)  It is also mentioned that Vulcan venous blood would be rust coloured as opposed to green and I was going to use that, but the hemoplasmic scenario was more ‘user-friendly’.

Pon farr can be halted by meditation and the Vulcans had a colony on a planet prior to 1957, so I am speculating that they may have had other colonies at that time. Vulcan High Command controlled the Vulcan Science Council. (Not the ScienceAcademy, which was an educational establishment) They were watching Earth from as early as 1957, and were well placed to know what was happening with the aliens, as well as making contact in 1957 (ENT Carbon Creek). There is nothing to suggest that the Vulcan who remained on Earth in that episode (Mestral) did not play some role in the events leading up to this story, possibly by influencing Thornton’s attitude and acceptance of Straker. However, most of this is pure fun. No offence to either universe is intended!

And YES!!! I have just watched Enterprise. The next to last episode.. and a human and Vulcan CAN conceive a child.

Special thanks to The Ed Straker Herald whose biography of Ed Straker I used as the major guideline for events in his life, eg. Astronaut training aged 26/27 just prior to joining Henderson for example.

One day I may well continue this story – I feel in a way that I have ‘copped out’ by not doing his wedding night!