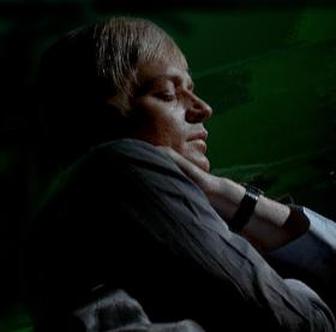 He looked at his watch again. 04.47 hours. And he was still awake. He turned over, restlessly, trying to get comfortable on the  bed, but whenever he closed his eyes, whenever sleep crept up on him, he awoke with a jolt, sure that there was someone in the room, someone  there, just standing, just watching. In the end he gave up trying to sleep.

There was no point in it.  He reached for his book. He might as well do something instead of just lying here, knowing that he was not going to sleep.

05.12 The book fell from his hand and slipped onto the floor, pages creasing under the weight, the spine damaged by the impact. He woke, startled, aware that he had, finally, drowsed off. He rolled over onto his back and lay there, staring at the ceiling, just thinking. There was no logical reason for him still to be awake,  no further threat,  no imminent danger.  Everything was in order.  But his mind simply would not relax.

The long minutes slowly ticked by in a confused blur of emotions and sensations. The steady humming of the air-recycling; why had he never noticed before how noisy that was? The hiss of the airlock door outside his cubicle as it opened and closed, opened and closed. The feel of the airbed, unyielding and strange, sweat on his body as if he was too hot, despite the perfectly controlled temperature,  the dryness of his mouth, his lips.

For heaven’s sake, it was now.. …what time was it?  05.36. He turned over, trying to get comfortable. It was useless.  Whoever had designed these beds had obviously never had to sleep in them.  The airlock hissed again.

05.46.  Enough. He would get up now, and start the investigation early. Flinging the covers back he sat on the edge of the bed.    Time for a shower, and he could be in Moonbase Control in fifteen minutes. With any luck it would be a quiet day, nothing untoward happening. He just needed to find out what had happened to  Craig to make the pilot try to kill him in the night. That was all he had to do today.

One thought on “Ed Straker: One hour”