First in a series of vignettes. More wil be added as they are completed.

He signed his name, a neat  squiggle at the bottom of the final page. His initials were enough for  the rest of the documents, but they insisted on a full signature to  complete the transaction. Done. The woman held out her hand as if to  shake his, but the man, busy folding the papers and putting them in his  briefcase, was oblivious to the gesture.

‘Congratulations,’ she persisted. ‘A very quick sale. I’m glad we were able to expedite matters so quickly.’

He looked up, a slight frown creasing his forehead, his thoughts far away. ‘Quickly?’

‘Yes,  it can take up to two months sometimes to get all the surveys and legal  matters finalised, especially with such an unusual property.’

Not  only monosyllabic but also pretentious, she thought, seeing the name  engraved on the plaque.  E. Straker.  An odd customer, one of those rare   men who simply handed the whole process over to the solicitors and let  them get on with it. He had not even queried the additional extras that  were so very profitable to her firm

‘I understand the property  was originally a gatehouse. Quite a history as well. Guarded the  entrance to the Harlington estate. All sold now, for death duties and so  on. Family treasures dispersed, the mansion demolished  in the 1920’s.  The gatehouse is the only part left.’

‘I wouldn’t know.’ Straker  picked up his case and held out his hand. ‘Keys?’ There was a short  pause and a jingle of metal. ‘Thank you.’ He walked out without looking  back.

The sky was dark, and  clouds accumulating on the horizon  threatened heavy rain and blustery wind. He almost missed the entrance  to the driveway; after all he had only been here the one time, and that  was for a brief walk through. Living room, kitchen, bedrooms, bathroom.  The very basics, but it had a decent sized plot of land and was private.  That was enough.

Weeds covered the driveway, the front door  groaned with disuse as he pushed it open and the floorboards creaked    underfoot. He stood there in the gloom. It would suffice. The builders  would be starting tomorrow and he had asked the garden landscapers to  build a climbing frame built for when John, hopefully, came to stay. 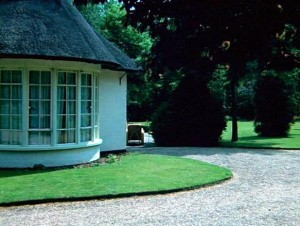