Civilian test pilot Paul Foster is on a flight over the Atlantic Ocean when he sees a UFO. He begins filming but then another plane shoots the UFO and Foster’s plane is caught in the blast. He manages to eject, but his co-pilot is killed. 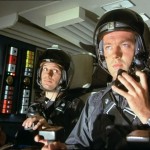 Foster wakes, six days later, in hospital, temporarily blinded. Once he has recovered, he goes to met Mr. Kofax, his employer at the Ventura Corporation, but Kofax brushes off Foster’s claims to have seen a UFO and tells him to take some leave. 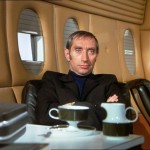 Foster insists on a hearing  to tell his side of the story. He meets a Dr Jackson who shows him the cine film from the plane. There is no sign of the UFO.  Foster accuses Jackson of tampering with the film.

He returns to his flat only to find a young woman there, Janna Wade,  who claims that she is the sister of the dead co-pilot. Foster returns to Kofax’s office late at night to retrieve the co-pilot’s camera. While he is there he sees a letter addressed to Ed Straker, Harlington-Straker Studios.

Foster returns to his flat, and looks through the slides from the camera. They too have been edited to remove all trace of the UFO.  Janna  leaves Paul’s flat to go and find newspaper reports concerning Straker, and Paul is then attacked by two thugs who trash his apartment. 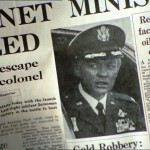 When Janna returns she has brought an old newspaper that has a report of the crash in 1970 involving Straker.  Foster makes an appointment to see Ed Straker.

He meets Straker in the studio grounds and Straker tries to convince Foster that he was mistaken. When Foster shows the newspaper cutting, with Straker’s photograph, 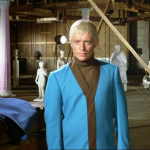 Straker takes him into one of the sound stages and tries to persuade him to change his mind, then appears to shoot Foster, with what turns out to be an acoustic gun. 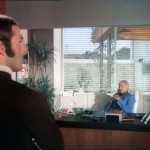 Foster is unhurt and Straker then takes him into SHADO headquarters, and introduces him to various members of SHADO including Janna Wade, Dr Freeman and the two ‘thugs’ who broke into his flat.

The episode ends with Foster being offered the chance to join SHADO, and  being  give a security card already made out in his name. 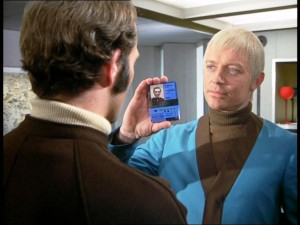