London. August 2012
One Shot
He lay  prone on the mat, mind half-aware of the crowd falling silent, even as  he was focusing on the sights. A long way to the target.
Too far? No. He had trained for this, trained until targets blurred from exhaustion and his muscles trembled with fatigue.
Perfect  weather. Cloudy skies, no sun glinting in his eyes, no wind to distort  the path of the bullet.  He waited. There were others waiting as well,  but he ignored them. He had been selected for this moment, chosen for  his skill,  his dedication. Years of practice all coming together for  this single shot. There would be no countdown, no starter’s gun, no  cheer as he crossed the finishing line. It was a let-down in some  respects. And there would be little kudos afterwards. He didn’t care.   If he did this right there might be a medal. But that was not important.
He  shifted position slightly, just a fraction of an inch, the merest  amount needed to get his eye closer, to get the rifle tight into  his  shoulder. The target ahead, his finger around the trigger, the curve of  the metal comforting, the ground hard under his elbows. The target  blurred and he blinked.  Clear sight now. His preparations complete.
He  waited for  confirmation, slow breaths ensuring that he was ready, his  finger tighter now. The word in his ear was almost a shock.
‘You have a go to proceed. Repeat. Go to proceed.’
Straker  held his breath. Blinked once more, focused on the small figure  crouched on the rooftop in the distance. He pulled the trigger. He did  not need to see the terrorist fall to know the shot had been on target. 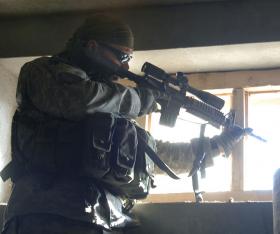 Such a small thing really. He had refused at first, but they  needed people to help cover the route. Too many important dignitaries  arriving, too few  marksmen. And the terrorists were there, waiting to  destroy the Games. Straker had agreed to help out. Just this once.
He put the rifle down, stretched his fingers and relaxed.  Terrorist or alien. It made little difference really.
LtCdr 04.08.2012
There  is a plethora of stories about the Olympic games right now, and this  insinuated itself into my brain late last night after an idle day  watching Team GB win six gold medals. It is pretty far-fetched (I hope)  but there were  some initial  problems with security in a couple of  places and military personnel were called in, so, why not call on the  services of someone who we know is an expert marksman?