Of all the women who appear in UFO, none seem to have quite the same ‘lure’ as Gay Ellis. There is a ‘china doll’ prettiness about her that is both appealing and, dare I say it, virginal. Perhaps it is that scene in Identified, (Oh go on – you know EXACTLY which scene I am referring to!) 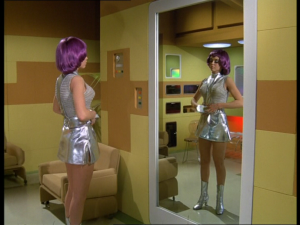 that puts her firmly into the ‘drool’ factor for guys. Even ‘Joanna’ in her silver bra and panties (and that bra did not fit well!) or Virginia Lake with her huge eyes and ‘Madonna-style’ pointed bust never achieved quite the same level of fame.

I think that if you asked most people, they would say that Gay was the most notable female character in the series. Many of the others hardly get a look in!

So, how many episodes featured Gabrielle Drake and, more importantly, can you name them? (Answers at the end!)

Ten. That is all. Less than half the series.

We know very little about her apart from the fact that she is probably British and she suffers from a lack of self-confidence at times. In Close Up we see her striving to succeed in a male dominated world, yet she has an elegant poise that hides her underlying fear of failure. She is an enigmatic character, aloof and distant at times, yet there are some delicious moments where she comes over as almost desperate to please, wanting to be praised and appreciated. The character of Gay Ellis has very little opportunity to develop, and she remains very much on the periphery of the action, despite the odd scene where she shimmies along a corridor! Yes, we see her in Computer Affair enjoying a relationship with Mark Bradley, but that is never mentioned again, and Bradley is hardly seen again after that episode, disappearing after Kill Straker!

Other female characters are, more often than not, seen a couple of times and then relegated to ‘bit parts’ in the background. One of these is Joan Harrington, who actually appears in fourteen episodes! Her most memorable scene is, for me, the one where she kills Straker with that look when he reminds her that he takes two sugars in his coffee. A perfect moment, made even better by the fact that the boss is completely oblivious to her anger.

Ayshea is another such character. Our first view is of her pink- angora-clad bottom as she heads for the studio, but again she is very much an unknown, kept apart. Eye candy for the masses. Such a waste.

I won’t fall into the trap of saying that Virginia Lake takes over from Alec Freeman after Sub-Smash. I know George Sewell left the series, but as a fan, I like to imagine that Alec Freeman was working in one of SHADO’s many other bases, perhaps McMurdo Sound! Seriously though. Alec Freeman was such an integral part of SHADO, such a perfect foil to Straker, that if he had been killed then Straker would have not been able to function as well as he did afterwards.

In the UFO world of my imagination, Alec Freeman is still there. Maybe running the night shift, maybe developing a new defence aircraft with the RAF in Warton, but talking to Straker on a daily basis, keeping in touch, keeping Straker ‘grounded’ as it were.

So, in my humble opinion, Virginia was merely another ‘Colonel’, similar to John Grey, and assigned to headquarters to assist Straker while Freeman was away. Lake had some good moments in the series though, particularly in Destruction where she is in Skydiver, and of course in The Man Who Came Back where she comes over as a woman who is not only liberated and confident with her own sexuality, but also as someone who does not require the support of a man in order to be fulfilled.

However, as we saw at the end of Mindbender, when Straker comes out of his office and sits down, the first person to approach him is not Lake, but Paul Foster. The script writers kept her very ‘distanced’ from Straker, a deliberate move. She stands meekly in the background, not making any move to comfort her boss, or even showing much real concern, which negates any speculation that there was an emotional attachment between the two. Again. my personal opinion, but one that I feel is backed up by the events that we see in front of us.

Likewise, in the final scene of The Long Sleep we watch Straker walking away, past the bench where he sat with Catherine earlier. We see Lake following him, but he does not pause to let her catch up, as he would have done with Alec, or Paul. She is an operative. One of his staff. Not a valued friend. As I said, though, this is the way that I see their relationship.

Anyway, nine episodes. One less than Gay Ellis, And yet Colonel Lake features heavily in a number of UFO fanfic stories, including some of mine and Gay Ellis hardly appears in any real sense as a major character in fanfic.

So, who else is there in UFO?

Sylvia Howell, the curly-haired Skydiver Lieutenant in seven episodes, Miss Ealand of course, who was in ten, Miss Holland who was in two. There were plenty of other minor characters as well, filling in the background with their big hair and tight outfits, keeping the male population interested in more than the special effects and models.

And one more. A woman who hardly gets mentioned, yet was one of the regular cast, appearing in every episode apart from Court Martial and The Psychobombs, who was competent and efficient, sometimes in charge of Moonbase and the best sonar operator SHADO has got!

Nina Barry. A great actor, perfect for that role in Sub-Smash. Somehow I don’t think that final scene in the stricken sub would have had so much impact if it had been Gay Ellis’s sitting there, admitting that she was glad it was Straker. There would certainly not have been the same level of angst. I suppose the real difference is that Gay Ellis was an ice maiden, cold, detached and probably one of those women who is looking to rise through the ranks, regardless of who she treads on. (Remember her decision in Computer Affair… deliberately risking Bradley’s life, just to prove a point?) 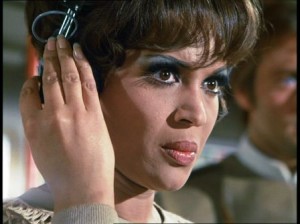 Nina Barry has been with SHADO and Straker from the start. She has greater maturity than Ellis and has real empathy and emotions. Of all the SHADO woman, she is the one that I like the most, a woman who can show her feelings with a look, a smile and a single word, yet has respect for those around her, as well as being a truly beautiful woman.

Mention Moonbase girls and the name Gay Ellis will appear. I always feel sad that Nina Barry doesn’t seem to be awarded the same level of appreciation. She deserves better!

She appeared in: Identified, Computer Affair, Flight Path, A Question of Priorities, Ordeal, The Responsibility Seat, The Square Triangle, Close Up, E.S.P., and Kill Straker!