The book was dog-eared and somewhat tatty round the edges, its fine leather cover battered and creased from having been stuffed into small cases. The dark material gave no clues to the secrets that might be contained within its pages. Unlined sheets of creamy paper, the odd one turned over at the corner. Just a book; unremarkable, unexceptional. And unnoticed.

Moonbase. It was meant to be a new start, a new life. That tingling thrill of danger, of exploration, of being out there on the very edge. I loved it. Every moment. Every bloody second. Even the ones spent waiting, sitting there in those damned cockpits, waiting for a voice. ‘Interceptors. Immediate launch.’ I wondered if Straker had planned it, the fact that the last voice we might hear would be that of a woman? And her voice as well. I wouldn’t have put it past him. He’s a cunning bastard. Devious, cold, calculating, but SHADO wouldn’t have worked without him in control.

The reader paused, closed the book but one finger stayed between the pale sheets of paper to mark his place. He breathed deeply, then lowered his head as he let the book fall open again in his hands. He would not be disturbed in here. He could read without fear of being interrupted.

He pushed us all hard, too hard sometimes, but it worked. I admire him. Yes, and also hate him. And anyway, I wasn’t there for that long. I grabbed every opportunity to move up the ladder once I had accepted the fact. She didn’t even know I existed really. I was just another pilot, just another guy sent there to protect Earth from the aliens.

It wasn’t easy. Change never is. But I studied, trained, and … succeeded. I moved up and moved away. Straker encourages us to diversify, and it makes sense. One year an interceptor pilot, trained to deal with the enemy coming at you faster than your mind can comprehend, fighting in the blackness of empty space. No light. No safety. A thin cockpit is all that protects you from instant death.

The next year in control of one of the world’s fastest submarines. So very different and yet in a way just the same. Water pressure kills as swiftly as vacuum. Maybe next year I will be somewhere else. I don’t mind. I have no family, no ties that bind me to one place.

But for now I am here. The Captain. And she is here with me.

And so will he be, soon.

Should he read on? What would he discover. About himself, about the other? But his inquisitiveness drove him to focus his eyes on the words instead of the walls of the cabin. But even so, he felt uncomfortable, uneasy as if he was looking into the soul of a man. But which man.

Hate. I know I don’t hate him. I say the word, but at the same time I respect him more than anyone else I know. I couldn’t do his job. This one is hard enough at times. I sometimes wonder if I might, one day, be good enough to get into the line of command. Stupid really, but he has that effect on you. You want to follow him. Well, at least I do. And yet………… I am torn. Hate? No. Never. How can you hate a man you admire so much?

I suppose it is more that I envy him; after all I don’t think he realises how she feels about him, and I have never told her my feelings either. So here we are. Three adults. Unrequited love as they say. The eternal triangle. I love her, she loves him. Straker? He doesn’t know how she feels. Probably never will.

That’s the thing about Nina. I have seen her liquid eyes watch him as he walks into a room, seen her catch her breath when he moves closer, seen that faint tremble in her fingers, her lips waiting for a kiss. But he won’t, and what is worse I think, is that even if he did want to, he wouldn’t. Not while he is her Commander. So she hurts. And I hurt too when I think of her, ignored and unloved. Not out of malice, or the fact that Straker doesn’t care about her. He cares. I know he does. He would give his life for his people; he would make sure that they were safe first. But not in that way of caring. As a lover. Or if he does, he hides it well. She is just Nina too him. The best sonar operator we have.

She is so much more than that to me. I ache to hold her and comfort her when he turns away as if she doesn’t exist, as if she is nothing more than simply an efficient Lieutenant. But I won’t. I am the Captain. He is my beloved Commander. And Nina? She is the woman I dream about on those hot disturbed nights, when I wake in fear that something might happen to her before I can summon up the courage to tell her how I feel.

I shouldn’t really be writing all this down, although this is my personal log. No-one will ever get to see it unless there is an incident and something happens to me. Let’s be honest though, if there is an incident then chances are we won’t get out at all. Submarines are not the easiest thing to abandon.

With any luck this will be a quick and easy mission. A trip out to the area where the Atlantica 4 was sunk, track down any UFOs, and then I can drop our passengers off again. Straker and Foster won’t want to be on board for too long and Nina will go back with them.

It’s okay really. I’d rather she was gone. Then the distraction is gone, and I can concentrate on work. I can try to put her out of my mind once more.

Work calls to me even now. Straker and Foster are about to arrive. And although I don’t want to be out there, in that small cramped space, standing so close to her, wanting to reach out and run my fingers over those lips, and taste her kisses, and all the while knowing that she wants another man,  I will have to.

The man closed the book with care, his eyes narrowed in thought. He placed it back on the desk where it had been left in this private room. Not left on view intentionally or meant to be read by anyone. But the visitor to the cabin was as curious as a cat. Perhaps he should not have read it. After all, words cannot be taken back, or unread. He sighed, not from weariness, but with that sad and quiet acceptance of a truth that would always, would have to, remain unsaid. He ran a hand through his short blond hair as Captain Waterman’s voice came over the intercom.

Straker grabbed his jacket, slipping it on as he hurried out to the control room. To Waterman. 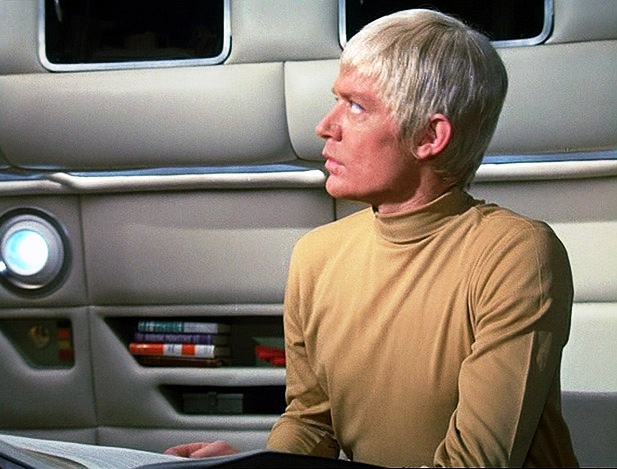 This wasn’t going to have Straker in it at all, originally. I had intended just doing Waterman’s diary and leaving it at that, but, somehow it seemed impersonal and the ‘eternal triangle’ bit made me think that perhaps Straker could be reading the diary. Ideally I would have liked him to have been reading it when he thought he was alone, at the end, in Sub-Smash. But it wouldn’t have fitted in with the story and anyway, it would have taken the focus away from Waterman.

That is the problem with Straker. He tends to step in when you least expect him.

And I have just watched Sub-Smash again and made a few changes to this story. Originally the diary was going to be hidden under a pillow, but I am going to make it so that it is the black book that Straker reads in Waterman’s cabin.