I knew I was going to have to tell her sometime today, but she was still asleep when I pushed back the covers and, muscles stiff and aching, sat on the edge of the bed. Not enough sleep last night. Not enough sleep most nights really. Nightmares do that to you. Make you afraid to sleep, to close your eyes in case they come for you.

It was too soon to get dressed, or do any of those mundane things like shower, or get a coffee. I headed for the bathroom anyway, to take a leak. It was  the only  thing making me  get out of bed. I stood there in the bathroom, thinking, wondering how I was going to tell her. What she would do.

Too early. But I was up now, and awake. And restless.  It was simply force of habit that had me reaching for my gun. The routine so firmly ingrained into me that I could no more have left for work with it still  uncleaned than I could have gone unshaven.

I sat at the table, holding it in two hands. Rule one. Every gun is always loaded. This one was. As always.

It’s not difficult cleaning a gun, if you know what you are doing. Oh it’s easier in a quiet well-lit room, where there are no distractions, but I’ve done it blindfolded before now. So a dim bedroom is no real hindrance. And anyway I didn’t feel like leaving her this morning. I wanted to sit and watch her sleep. It might well  have been the last time.

It fitted my grip comfortably, as always. A part of me, an extension of my hand, the gun I have trained with, slept with. It took a moment  to spread the chamois cloth over the table and get the cleaning kit  out and ready. She was still asleep.

I unloaded  the magazine, locked the slide and racked it  three times. Force of habit. The simple routine that is so familiar by now. Locking the slide open again, looking down the barrel, checking, feeling the chamber to make sure it was empty. I picked up the magazine and carried it through to the hall cupboard, out of harm’s way, and closed the bedroom door when I returned. It’s too easy to reload  by habit, especially if your mind is elsewhere. I haven’t survived this long by  treating guns with casual nonchalance.

I didn’t sit back down at the table. Behind one of the pictures in the bedroom  there’s a specially designed ‘backstop’  which is reinforced with the same material used in bullet proof vests. It’s concealed and discreet, and I picked the Glock up and walked over to stand in front of it. I couldn’t even tell you what the painting depicts. It’s a backstop. That’s why it’s here, in this room. One more  look down the barrel, just to be sure. Rack the slide again. It seems like paranoia, but it’s necessary, then I lowered the slide,  pointed the gun at the picture and pulled the trigger.

I padded back to the table, sitting down and holding  the gun  in both hands, pointing away from me. Yes. I know. It’s empty. It’s safe. But if you follow procedures you won’t get hurt. And more importantly, you won’t hurt anyone else either.

I think I will hurt her though, today. Whatever happens.

There was a noise from the bed. I put the gun down, and turned, but she was just stirring, the covers slipping off her shoulders. When I reached her side she had settled back into her dreams, and I tucked the covers in, hoping to delay that moment when I would have to sit on the edge of the bed and tell her, in bland cold words. It was tempting to lean over and kiss that face, but I had the gun still to do, and I don’t like having it disassembled for any longer than necessary. And, besides, her engagement ring was lying there on her bedside table. I didn’t want to look at that.

It’s a simple matter, removing the slide, just a case of knowing where to grip and how much tension to put onto the takedown lever. I do this every day pretty much, so it’s second nature. Like changing gears in a car. You don’t  think about how you do it, you just get on. So  I stripped it down, working as quietly as possible, placing all the pieces; the slide, the recoil spring, the barrel,  all neatly on the cloth.

I carried on in silence, nothing distracting me from the task. Wiping down the outside surfaces with patches soaked in solvent, then methodically  pushing fresh ones  through the barrel, until they came out untainted. Cleaning the crevices with pipe cleaners, using a toothbrush to scrub the nooks and crannies, brushes to remove the tiniest scraps of detritus from inside the barrel, until everything was clean.  The outer surfaces spotless, the breechface scrubbed free of all its accumulated grime, the recoil spring wiped down, the frame. The pieces laid out in a  row, ready to be lubricated.

She would be awake soon. And I would have to talk to her.

It’s a fussy weapon, the Glock. For all  its accuracy and reliability it likes  to be  handled with care.  Too much oil tends to spoil the mechanism. So I took my time, working slowly, listening to her breathing,  and smiling at  the  odd gentle snore. One drop of oil at a time. Just one.  Wiping any excess away with clean patches and  smoothing over the surfaces to leave the faintest gleam.

Done. Clean and ready to go back into use. I could have reassembled it with my eyes shut, I have done it so many times, and the pieces fitted themselves back together  like  the simplest jigsaw puzzle.  Quiet satisfaction as the last piece went back and I racked the slide again. One last task. I stood up, walked to the backstop one last time, pointed the gun at it, and pulled the trigger.

I know. It wasn’t loaded. It was safe. But even so I still do that. Every time I have cleaned it.

I didn’t make the regulations. But they are there for a reason. Just like the rules I obey without hesitation every time I clean my gun.  And I have to tell her. Today. When she wakes.

I can’t marry her.

At least I don’t want to marry her.

Not if it  means I will lose her.

I  put the Glock down on the table  and went to make her a coffee. 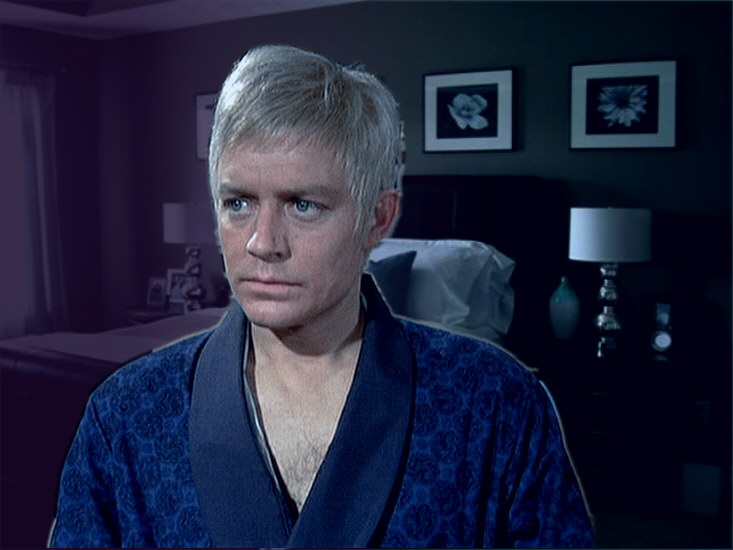 This story has its basis in a discussion  regarding the Chain of Command. I had planned to let Straker and Rachel get married, but it isn’t realistic, unless she moved out of SHADO HQ into a different department. (Possibly the IAC.) And I like her. I didn’t want the Chronicles  to end but marriage within the chain of command simply isn’t feasible, and if she married Straker, then there would be no further stories with her in SHADO.

So. This is my answer.

It means that I will have to write Rachel’s point of view as well.  I will be re-writing just a couple  of the Rachel Chronicles over the next year or so. I have treated Paul Foster very badly indeed for which I apologise and I hope to rectify that. That is the problem with suddenly  realising that I want to write stories that are  if not exactly  ‘canon’ at least adhere to the  characters as they  were portrayed by the actors.