I decided to take a long hard look at the reasons why I started to write UFO fanfic back in 2009. It’s certainly not for the kudos, or the reviews. It’s not as if there are that many writers either. The number of UFO writers has decreased over the years, and many of them have moved on to other fandoms or even to original fiction.

So why UFO? What is it about this fandom that lures me back? Well I do dabble in Thunderbirds, as well as a couple of other fandoms, but only as a pastime, for light relief in a way. I don’t do it seriously and there are a sufficient number of good TB writers out there for me not to be needed.

I suppose one reason stems from my love of Star Trek ToS (and I don’t have any intention of writing Star Trek fanfic) During those long and empty years after the show was cancelled, fans were desperate for anything that continued the series, anything that would enable the Enterprise to continue its mission! I remember trying to get ‘Uhura’s Song’ from my local library and waiting weeks for it. I feel sure that it was the quality and quantity of Star Trek fanfic and then the published novels that kept Star Trek alive long enough for someone to realise that this was a viable series and could be re-born. (I make no comment on the latest film.)

UFO is far more important to me than Star Trek ever was. I remember waiting on a Saturday afternoon at 5 pm, counting down the minutes until ‘Identified’ began. I sat there enthralled as the opening sequence started and the alien’s eye appeared, seeing all the cast, putting faces to the names that I had been reading about for months, listening to the music, and being thrilled that this programme was so much better than Thunderbirds and Captain Scarlet. (I refuse to even think about Joe 90 or The Secret Service.) It was ‘real’. And it was also British. It was a world that I could relate to, that had cars and buildings and costumes and locations that were familiar. This was my country and I was proud to be English. UFO was also ‘adult’ and far grittier and more audacious than Star Trek with its attractive and readily available Captain. It had a very different appeal to the Anderson puppet shows, which were clearly aimed at family audiences, and although it only lasted for 26 episodes it still remains a cult classic among model makers and fans of the lead actors.
Part of the attraction was surely due to the very daring approach taken by Gerry Anderson with regard to the characters in the series. No more ‘Mr Nice Guy’ characters. Instead we were presented with Ed Straker, angst-ridden, repressed and emotionally scarred. Groundbreaking casting as well, with George Sewell, Harry Baird, Dolores Mantez, Gabrielle Drake.

Forget that Star Trek had Uhura. UFO had women in command of Moonbase, and women serving on its submarines. It was not just set ten years in the future, it was years ahead of its time. In the real world, it was only in October 2007 that a woman took command of the International Space Station, and as for submarines, it was not until 2010 that the US finally lifted its ban on women in submarines, and the Royal Navy still excludes women from serving in its subs. That gives you some indication of just how advanced and innovative UFO really was.

As for the main characters in the series, Anderson fans were already familiar with the ‘widowers ’ that we were given in Commander Shore, Jeff Tracy and Colonel White. We knew what to expect in the heroic main man… (or men) of Troy Tempest, the Tracy brothers and Captain Scarlet etc, but Commander Ed Straker went against all that. Here was the first really damaged ‘lead’ character to be portrayed in an Anderson programme; a man who had lost everything and still kept going. Duty, service, dedication. What a role model to follow.

The other characters also had lives that suffered as a result of their work. So UFO was altogether a very different kettle of fish to anything Gerry Anderson had done before, and in fact I cannot recall any other television programme of that era that gave its lead character such a tragic background.

But that to me is part of the attraction with UFO. We are given a fairly detailed look at Straker and what drives him. He is a character filled with emotional turmoil, driven by his own sense of duty to continue the fight against an unknown enemy. If you look closely at some of the episodes there are further hints to his background and these provide us with opportunities to develop him even further. It’s not like the Tracy boys, whose background is vague to the extent that we don’t even know the name of their mother. We do know that Virgil paints and plays the piano. That Gordon is a good swimmer. But those are minor details. It gives writers the freedom to let their imagination run riot.

Not so with UFO. Straker is divorced. An acrimonious divorce. His son has died, partly due to Straker’s own sense of duty. There are so very very few times of real joy in his life that the start of The Long Sleep comes almost as a shock to viewers, and even that rare moment of happiness is short-lived. He lives alone. No pets. No girlfriends. A lonely life devoid of companionship and love. Even his ‘closest friend’ Alec Freeman admits that he does not know Straker very well. That adds to the appeal of writing UFO. The constraint of having to get the personality ‘right’, of looking closely at the episodes and trying to ‘flesh out’ the characters, of exploring the relationships with each other. There is a whole world of stories out there, especially when you watch an episode such as Question of Priorities and wonder to yourself – what happens next? Fanfic allowed me to tell that story.

Perhaps the real reason I write in this fandom is that I simply love the character of Ed Straker. He is complex, damaged, repressed. The perfect subject for someone who likes writing angst. A man who Ed Bishop played as practically celibate and trying to get that aspect of Ed Straker into a story is not easy. In my opinion he is the most fascinating personality, but there is also a great sense of achievement in writing some of the other regular cast. Such intriguing characters. Alec Freeman who is the quiet, supportive ‘second’. Always there, always in the wings so to speak. And yet so often ridiculed in stories. Which is a shame, because I have really grown to love Freeman over the last year. Paul Foster is a complex personality as well. He tends to be shown as the immature ‘playboy’ who is trying to oust Straker, but again, if you watch an episode such as Sub-smash or Mindbender you can see the real devotion that he has for Straker. Jackson is another truly fascinating person to write, as Spyder’s ‘The Gift’ so ably demonstrates. But time and time again I come back to the one person who is at the centre of UFO. Straker. (oh ,.,. and he is also devastatingly handsome, and I was only 16 when I saw UFO for the first time!) 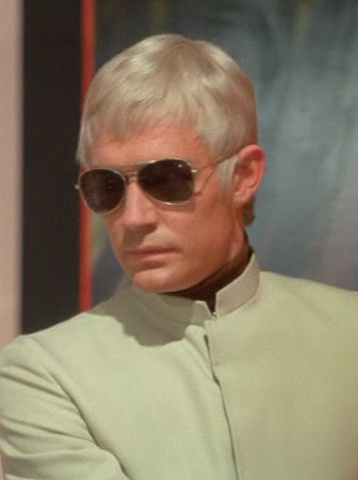 There are other reasons as well for writing UFO. It is a place to play, where things I could never do in my life can be worked out with characters I know and understand, in a world that is exciting and adventurous. I have always loved Science-Fiction, and I consider myself privileged to have been able to watch the exploration of space, to sit up late at night and watch, live, as Neil Armstrong stepped off the footbed of the LEM. UFO allows me to relive that thrill, to stand on the Moon and sweep my gloved fingers though that powdery surface and leave my own mark that says ‘I was here.’ I will never walk on the Moon. I will never go into space, but writing UFO allows me to write about those experiences. To imagine how it feels. And, because it is science fiction I am able to push those boundaries further, yet still have that security of characters who are ‘real’, of a UFOverse that could quite possibly exist. There are no quick fixes in the UFO world, no easy ‘get-outs’ to solve problems, no super-intelligent ‘Brains’ who comes up with a simple solution each week, no indestructible Captain Scarlet to save the world from the alien menace. Ed Straker’s world is a dangerous, razor-sharp world where anyone can be a traitor and where the enemy is unknown.

Why have I not moved onto a more ‘responsive’ fandom where I could get reviews by the hundred? Is it because I appreciate a single UFO review far more than the ones I get for other fanfics? A comment by someone who really understands the series and loves it as much as I do? I don’t know. There are time when I think to myself.. why bother? I could have written ‘ The Shepherd’ and had it starring Virgil Tracy instead of Ed Straker (The original ‘short’ version of Shepherd was about Virgil but was only 1300 words long!)I would get more reviews for one chapter than I have got for the whole story so far, but it wouldn’t have been the same. Virgil would have always seemed an ‘easy’ option. (And the relationship between the two damaged characters of Straker and Rebecca would never have worked with Virgil in place of Ed.) I like writing about a character who is tormented by his own failings, who makes me think seriously about the way I write, who sometimes steps in and gets very stroppy because I have given him some dialogue that is wrong. Who walks into a story and takes over. But, it takes up too much of my time. Time that should be spent on other pursuits instead of watching a single episode over and over again just so I can familiarise myself with the ship – sorry ‘setting’ (shades of Subsmash creeping in there!) Although, to be honest, watching UFO is as worthy as pursuit as any other hobby. And, to be honest, I think that working on a difficult story with such complex characters as Straker etc is one of the best ways to develop my own writing skills. Time will tell!

But mostly I write UFO fanfic because I hope, in my heart of hearts, that I am doing my small part to keeping this very rare fandom alive. That one day enough fans will read and appreciate and remember just how darned GOOD it was (and still is) and demand that UFO returns to the television screen. Look what happened to Star Trek. Look where it is now.

I think UFO deserves to survive. I want to give it that chance. Before it is too late. Before we lose those characters to that vast twilight of people who are no longer remembered. Who among you still recalls the characters from Time Tunnel or Sapphire and Steel, The Champions or Blakes 7?

One day I may well end up disillusioned, I may well write my last UFO fanfic, and turn to something more …. rewarding from the point of view of numbers of readers. But I doubt it. Not until we have a new cohort of writers who can continue writing UFO fanfic that fits the series, that is true to the characters. Or until the last UFO fan deletes their website, turns off the lights and walks away into the darkness.

Until then, sorry folks, I fully intend carrying on.
LtCdr.